Slice draw of a TH2 with THStack?

I want to do a slice draw of TH2F. The pattern of the slice draw is like the following picture. Is there a way to do this? 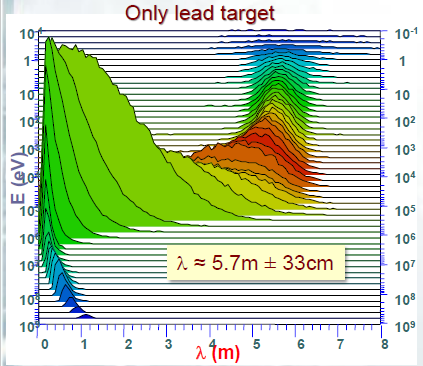 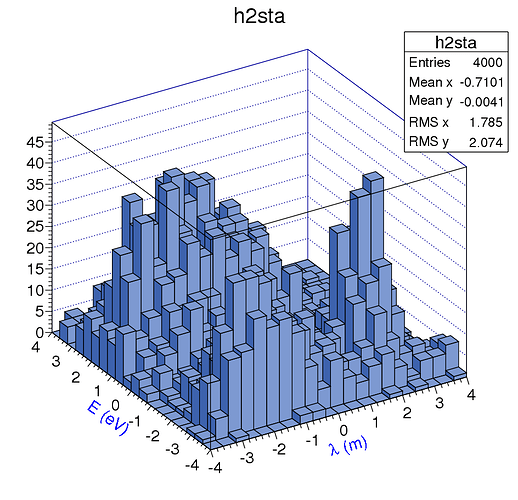 you can always fill a stack with slices of an histos of dimension higher than 1: https://root.cern.ch/doc/master/classTHStack.html#a0cdb877bb90549f84c751bd07493d4df

Dear dpiparo,
Thank you very much.
The THStack->Draw() method gives a graph in which that these TH1s covers each other one by one on the same plane. The graph pattern is not exactly what I want (certainly, the TH1s form the THStack() method is the one what I want).
What I want is the pattern in the fist attached picture in this post. The pattern, to some degree, seems like a ‘3D’ painting. In this pattern, the Y axis values corresponds to the bin center of the projected dimension.

Is there some other advice.

Hi, ok I do understand your concern. in principle you would have to log the z-axis. But this will have no effect on the violin charts at the moment. I will put that on my list :-), Anyhow before this is going to work I also have to implement a possibility for a correct scaling of the violin charts. At the moment the histo-slices (that what you call the blue lines) are all scaled to each max-bin of each histo-slice, So histo-slices with different max-bin entries per slice should have differe…

Dear ksmith,
Thank you very much.
It seems that your advice is right. However, it is a pity that I using V5.34 with Win7. I will manage to try the violin draw with higher ROOT version.
Anyhow, Thank you for your time!

Hi,
Unfortunately, the colorful slices will not be possible at the moment. But it looks interesting. Still thinking to put that on my list

In case you can live with the fact that the slices are one color only, I think violin is what you need.
in default case the slices will not overlap, use SetBarWidth(…) with an argument greater than 1 in order to do so.

As you are using Windows root6 or higher will not be available for you. violin charts in the way they are shown above are only available for root 6.someting. So you really need root6. I haven’t tried myself, but as far as I know root6 is running on docker now, that means should be running on windows, too, please correct me if I am wrong

Don’t hesitate to contact me if there are any questions regarding candle- or violin charts.

As you are using Windows root6 or higher will not be available for you. violin charts in the way they are shown above are only available for root 6.someting. So you really need root6. I haven’t tried myself, but as far as I know root6 is running on docker now, that means should be running on windows, too, please correct me if I am wrong

The ROOT team is pleased to announce that we are now providing ROOT in Docker containers through Docker Hub: https://hub.docker.com/r/rootproject/root-ubuntu16/. This means you can easily download and start ROOT on any machine that have Docker installed without compiling anything. Docker is currently supported on Windows, Linux, and MacOS. Containers greatly simplifies the distribution of ROOT by lowering the barrier for new users to try out ROOT, but also for existing users that may want to try…

Just so others who come across this topic know, it is possible to install ROOT 6 in a windows machine using the Windows Subsystem for Linux (aka Bash on Ubuntu on Windows). After the subsystem is installed you can follow the typical instructions for installing ROOT on a system such as Ubuntu. https://root-forum.cern.ch/t/installing-root-on-windows-10/22405/5?u=ksmith

I want to do a slice draw of TH2F. The pattern of the slice draw is like the following picture. Is there a way to do this?

Looking at your plot I see it is indeed a 4 dimension plot. Each plot has 2 axis (x and y), you then have a 3rd axis (the depth of your plots) and finally the colour which seems to be mapped on yet a other variable. There is no direct mapping of a such 4D object in ROOT. And certainly starting from a TH2F will not allow to define the colouring rule. The plot itself is not very difficult to produce as this is 2d graphs plotted on top of each other. Drawing them in the right order (black to front will be enough) . What is needed is the rule to define the graphs colors.

Dear couet,
Sorry for my late reply. Thank you for your time.
I do not understand how to plot this kind of graph with TGraph2D.
Further more, I would like to explain the graph:

The pattern of this plot seems like a ‘domino’ as shown in the following picture.

Each card of the domino is a ‘TH1’, and this ‘TH1’ is just a projection of a part of the ‘TH2’ (as shown in the next picture, the slice that enclosed with two red lines, and projected to the PSD axis). 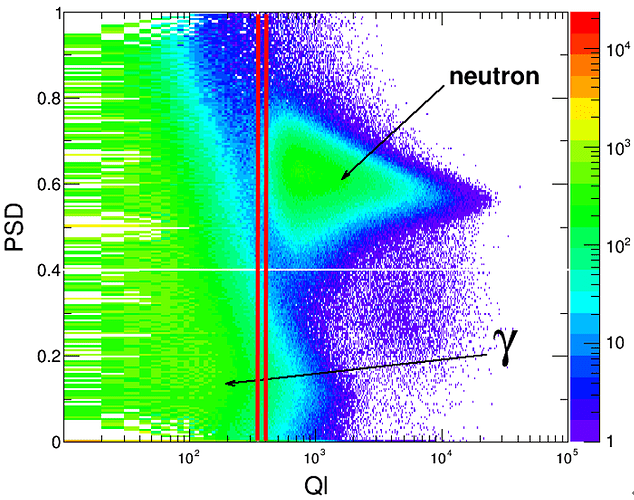 Ok I understand. There is no simple way in ROOT to draw a collection of TH1 with this pseudo 3D effect .