I would like to draw a second x-axis on top of my plot. This seems to work as long as I do not want to change my plotting range (graph->GetXaxis()->SetRangeUser(min,max) and as long as I am not setting the y-axis in logscale. I looked for solutions in previous postings, but unfortunately I could not find any [1-4].

To illustrate what I am doing, I added a couple of lines to the well-known example twoscales.C [5]:

this just works fine as long as one does not play with SetRangeUser of SetLogy. 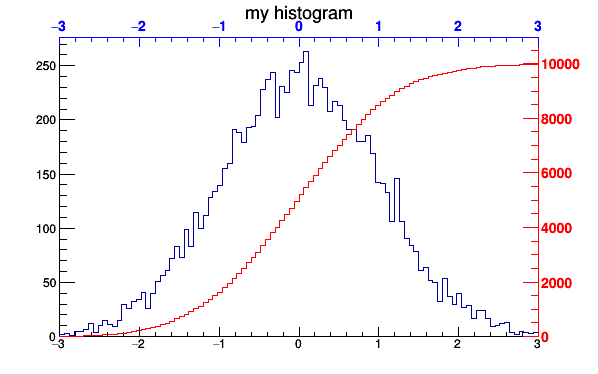 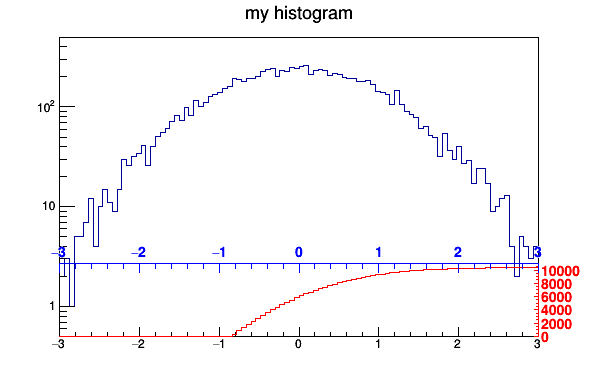 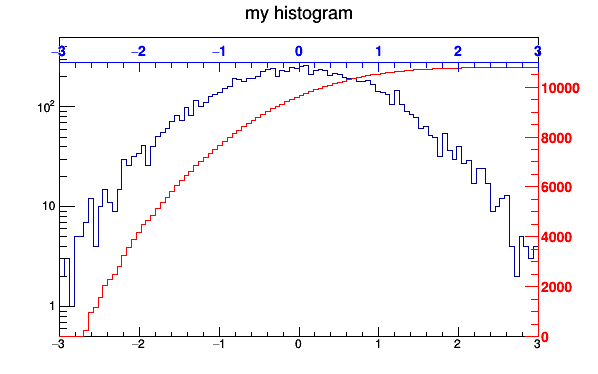 Unfortunately for my usecase it is necessary to use SetRangeUser, both on y and x-axis. On the x-axis I need it because I have several tgraphs in my plot and the range of the x-axis starts a little bit before the first x-value and ranges to a max-value, slightly higher than my last x-value. To let the thicks (and the values!) of the second x-axis correspond exactly with the values of the first x-axis I do not see an alternative to manually imposing the range of the plot. However using SetRangeUser results also in a strange result:

Does anyone have suggestions how to work with TGaxis when using SetRangeUser and SetLogy? I have attached the modified twoscales.C. twoscales.C (2.2 KB)
Thanks a lot for any suggestion!

[1] Add a second x-axis
[2] How to make plot with an equivalent x axis on the top
[3] Two axis with TGraph
[4] Problem with TGaxis using TF1
[5] https://root.cern.ch/root/html/tutorials/hist/twoscales.C.html

To be independent of the changes in coordinates you will do on the main pad I suggest you draw your axis on an overlaid transparent pad as shown in the following example:

Thanks. I am almost there now. 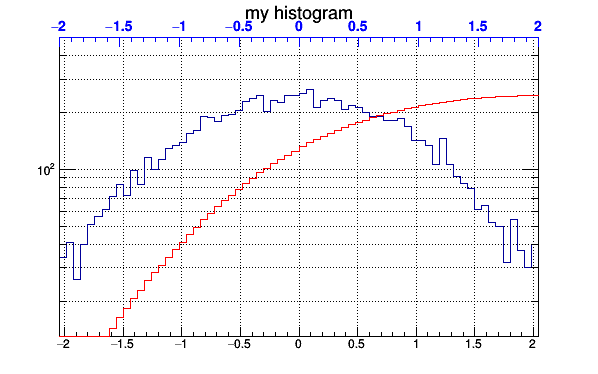 The only point that is not 100% satisfactory is that when changing the range on the x-axis (SetRangeUser(mymin,mymax)), the range is not exactly the range I set, it is mymin-epsilon, mymax+epsilon. Do you have any idea how epsilon is defined? I have attached my updated twoscale macro twoscalestranspad.C (2.5 KB)

Thanks a lot
Kind regards
Piet

I see what you mean: there is a little margin below -2 and above 2 on the X axis drawn at the bottom of the pad (the black one).

But at least the top blue axis should follow the black bottom one.

I have modified your macro to do that: twoscalestranspad.C (1.8 KB)

Thanks, Now I have worked it out. 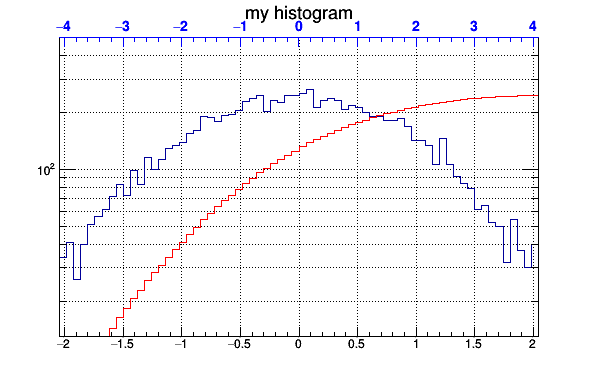 Obviously I did not want to have the same scale for the top and bottom axis, so I was a bit hesitant to adopt GetUxmin() and GetUxmax(). I saw that it was important to have (a couple) of c1->Update() before the changes got propagated to GetUxmin(). To get my final result I extracted epsilon and scaled the top x-axis correctly. I have attached my macro twoscalestranspad.C (2.8 KB).
Thanks a lot for the quick feedback
greets
Piet

Yes you got the idea