Trying to change the box width in a TH3

I’d like to make a TH3 using the option BOX but with the box size fixed. To do this I tried to boost each bin “heigth” to a value from where the box seemed to have its volume fixed, like shown in the first picture. But I only achieved this by editing the macros after compiling my code. 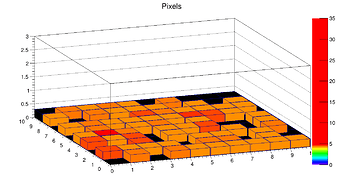 When I try to do it directly from my code (using this ZOffset3D.cc (422 Bytes) ), it returns the next graphic, “resetting” the scale. I also tried adding one extra bin, un-boosted, so that the scale changed to what it looked like in the first graph, but that didn’t work. 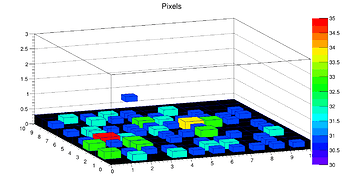 I’d appreciate your help with this problem.

If by the other hand there’s a way to fix the TH3 using the box function, that would also be really helpful.

Thanks in advance to you all.

The size of the boxes is proportional to the bin content.

I assumed that would be the case.

But when a bin has enough content, the box seems to have its sized fixed, as seen in the first image, so as I said I boosted all bin contents to that value but when I execute it, the palette/width scale is not the same as when I do it manually from the macro.

What is the TH3 you are using ? you only posted the macro which adds a constant to all the bins.

This is the main code: Many3DHistograms.cc (1.5 KB)
(the line 44 is commented so that it doesn’t boost the content then)

Just had to add two lines to the ZOffset3D code, this is the new one: ZOffset3D.cc (634 Bytes)

First, I added the h->SetMinimum(0) line at the end, which solved the scale issue. But that also filled all the bins to a “volume” z0, even the ones which were unfilled before, so I had to ask to make the boost only on bins which weren’t empty before.

Thank you for your help!