What am I doing wrong?

Here is the code:

“3-D Histograms
By default a 3D scatter plot is drawn. If the “BOX” option is specified, a 3D box with a volume proportional to the cell content is drawn.”

I cannot produce such a plot to validate if this is a true statement.

How do I accomplish this?

your data file is missing

Why is a data file necessary?
Use the above code with 3 variables, random or quasi-static will reproduce the original problem.

and receive an empty canvas. Not even a scatter plot.
Provide a running macro showing the problem.

I think your version of ROOT is too old.
I get the boxes with your macro.
See the attached picture.

Please read my original post, where I explicitly define my root version.

Yes I saw you are running 5.30.
I am running 5.34
I ran your macro with this version (5.34), and get the plot I posted which is correct seems to me.
If you do not get the same, it means your version has a problem with this option, therefore it is too old.

Well only other version available is 5.32 and according to the .pdf file that states the changes made from 5.30 to 5.32, this should not be an issue, therefore it should not be “too old”.

I have looked into using the glboxz and the glcolz, etc and I this does not produce a clear enough representation for analysis.

Can this be done?

3D histogram also supports glcolz and glboxz which is not in “3Histograms.pdf”, so it made sense to try them all.

Regardless, it appears ROOT does not have the capability to produce the histogram I need for my analysis.

With the lastest macro I get the box plot as shown on the picture I sent.
So for me it is fine.
Can you sent the picture you get with the last macro you sent ? … if it is not a box plot either you are using a version which is too old or there is a bug on the platform you are running root.

NONE of the pictures on pages 32 and 36 in the “3Histograms.pdf” shows any 3-D histogram.
They ALL are 2-D histogram representations.

You would probably need to create a 2-D histogram in which “X” and “Y” axes will be the first 2 of your variables and the 3-rd variable will be the “bin-contents”.

Here is a example of what I would like to do.
I have uploaded 2d.jpg, it is a 2D plot of a particles momenta vs. its effective mass. 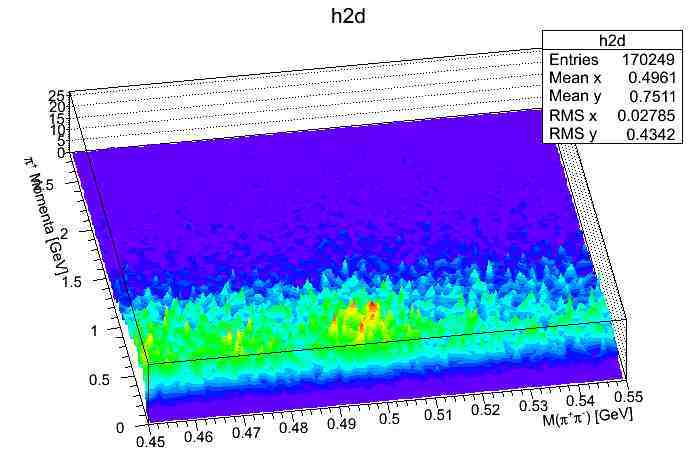 I would like to plot the z-axis as another variable, say a beam profile.
I have attempted to use TProfile2D 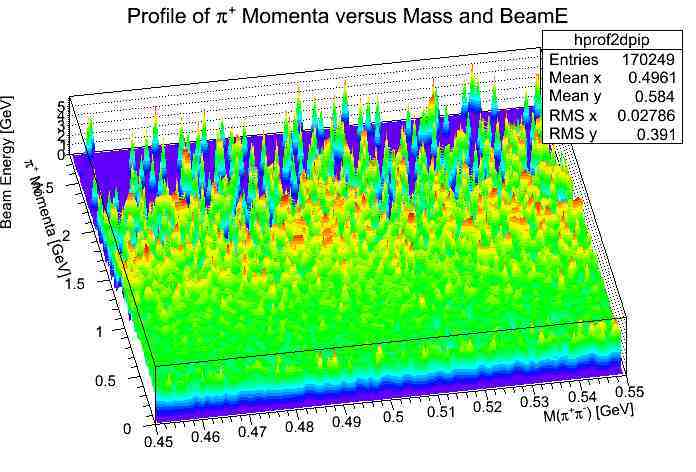 However the density at 0.497 is no longer present, I believe this is due to the nature of the TProfile.

I have uploaded a small .root file along with a new .C script.

I hope this clarifies what I have been attempting to portray.

ie, because that is the name of the .root file I uploaded

However the density at 0.497 is no longer present, I believe this is due to the nature of the TProfile.

Yes you are right. I’ll ask Lorenzo to give you more details.

About the suggestion to use TGraph2D

Heres a quote from http://root.cern.ch/root/html/TGraph2D.html

This software cannot be guaranteed to work under all circumstances. They were originally written to work with a few hundred points in an XY space with similar X and Y ranges.

This is true, I have over 40k data points, trying to use TGraph2D on 1500 data points ran overnight without results.

NONE of the pictures on pages 32 and 36 in the “3Histograms.pdf” shows any 3-D histogram.
They ALL are 2-D histogram representations.