I installed the latest ROOT (6.24/06) on a Windows 11 with WSL2 (which has native GUI support) and found a weird problem with graphics.

It is not a fresh Windows, but updated from W10, although it did not have WSL installed before, so it is a fresh WSL install.

As per the recommended ROOT instructions

From @olifre : Install WSL ( https://aka.ms/install ) and then Ubuntu 18.04 from the Windows Store. The first step is not needed anymore for most recent Windows 10 versions, I think. Start the freshly installed Ubuntu Bash shell and install the dependencies and some build tools: sudo apt update && sudo apt dist-upgrade sudo apt install build-essential libtbb-dev libtiff5 x11-apps git Now there’s no graphics, since WSL does not ship any X server. You can fix that e.g. by installing Xming and…

Hey ROOT, I just thought I’d propose adding some new information to the Complete ROOT Installation Instructions for WSL (Ubuntu 18.04 on Windows 10) WSL GUI thread, since unfortunately my own forum account doesn’t have the permission to post on it directly. It’s also probably just nice to to know information, since I suspect people here might not be the kind of people to install new Windows releases on the day they’re out. With Windows 11, and the upcoming release of Windows 10 21H2, WSL (or sp…

and MicroSoft’s instructions for WSL, I did this (with reboots where needed):

I did not install an X server, which should not be needed in this case.

With the above, ROOT runs and I am able to open TBrowser and TCanvas windows, for instance, but it is impossible to interact with them; and by the way, these windows also take several seconds to show up, so graphics performance seems worse than with WSL1 and an X server, at least for ROOT.
When clicking on any option (e.g. File, Edit,…), or right-clicking, the dropdown menus show up in apparently random (different every time) places on the screen. Moving the mouse as if the menu were in the right place shows that the ‘cursor’ is moving in those dropdown popups, because the options get highlighted accordingly, but clicking does nothing; looks like the mouse movement is going to those popups but the clicks are going where the mouse is actually located; if the mouse is hovered on the popups, these don’t react (they don’t know the mouse is there).

Here is a view showing an example: 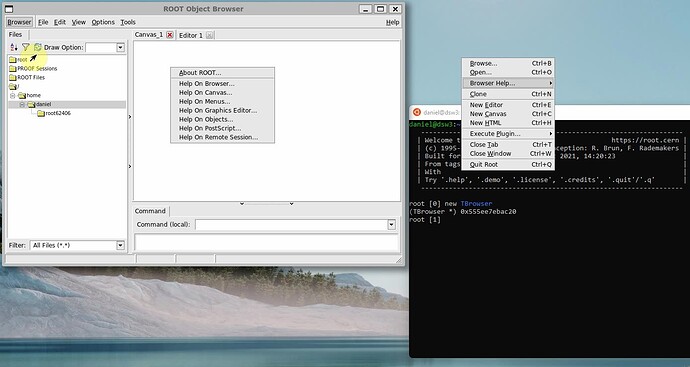 I already installed the vGPU driver, for AMD in my case, and it did not fix it; in fact, the screen capture was done after installing this driver.

I’m wondering if anybody has seen something similar or it’s just my system --maybe not an issue with Intel or NVIDIA graphics?

@bellenot, have you seen this issue before?

Nope, but I don’t have Windows 11 and I only tested on WSL (1 IIIRC) with a X Server. And I mostly work on native Windows (e.g. not on WSL)

@dastudillo any chances that you can try native 32-bit ROOT on Windows or WSL1 instead?

Or try with a X Server

@jalopezg & @bellenot Indeed I was planning to try first with an X server and WSL2, although it might get crazier, since WSL2 on Windows 11 is supposed to have its own graphics server, which may collide with an X server

If that fails I will try switching to WSL1. I will write back as soon as I have updates.

So I tried staying with WSL2 and using VcXsrv, and it works fine, as far as I have tested.
I don’t know if behind curtains WSL is complaining for having 2 GUI servers, but it seems to work

Just for completeness, when using WSL2 and VcXsrv (don’t know with Xming), adding these lines to .bashrc is needed:

but is not enough (in either Windows 10 or 11). When starting XLaunch, which always asks for some settings, one has to also activate the option “Disable access control” (in “Extra settings”), which is unchecked by default. This option is not needed when using WSL1 (and .bashrc only needs export DISPLAY=localhost:0.0 at least in the systems I’ve tried). 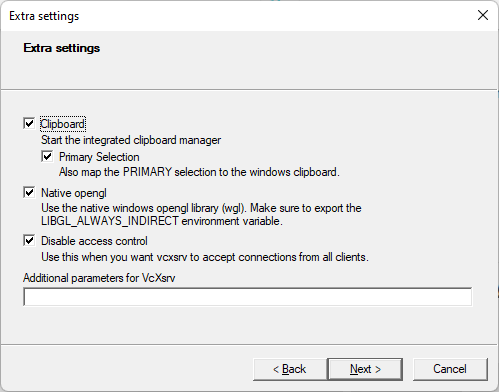 Cool, thanks for the feedback @dastudillo !

Turned on these Windows features: “Virtual Machine Platform” and “Windows Subsystem for Linux”, although it seems that the first one (VM) is not really needed, as I don’t have it enabled in a Windows 10 machine and Ubuntu and ROOT run well, with WSL1.

WSL1 doesn’t use virtualisation technology, it runs a compatability layer that translates system calls directly, so you don’t need the VM components active for WSL1.

I don’t know if behind curtains WSL is complaining for having 2 GUI servers, but it seems to work

From my understanding of WSLg’s architecture, if you adopt a third party XServer instead, there shouldn’t be any conflicts, but of course, you’d be expected to set the $DISPLAY variable manually, as you have done.

The LibGL part of the equation is more complex and I couldn’t give a direct answer as to when it’s needed, but the simple logic behind it is that it sends GPU commands to the client (Windows) over the network to run instead. The caveat is that it limits these commands to an OpenGL 1.1 specification, which is old and generally not even used; so to some degree it also indirectly just toggles off a lot of OpenGL use. And of course, a big part of WSLg was to enable GPU paravirtualization, which means that in most cases where the driver supports it, you’d just want to run it on the Linux side for simplicity’s sake, given it’s actually the same GPU in both environments.

When starting XLaunch, which always asks for some settings, one has to also activate the option “Disable access control” (in “Extra settings”), which is unchecked by default. This option is not needed when using WSL1 (and .bashrc only needs export DISPLAY=localhost:0.0 at least in the systems I’ve tried).

While I can’t say exactly the issue, the problem is that WSL2 uses a virtualised network adapter since it is actually a Virtual Machine. It has a second IP address on the system that can appear foreign to the Windows side of things. WSL1 uses the same network adapter / network interface as the host and appears much more native, so would be indistinguishable from localhost and not need to change security settings. Personally, this aspect of WSL2 upsets me the most, besides the lack of proper systemd support.

Finally, with the problem of the right click menu being completely disjoined from the display; I can’t offer any answers but I would suggest you report it on WSLg’s Github.