When I go into python and call things from ROOT, like TBrowser or TCanvas, the window pops up as it should, but when I try to go into the menus, it vanishes. For example, when I call TBrowser and go into the options menu, everything disappears except the menu. It won’t return until I click back into terminal then into the ROOT icon, but then all of it disappears when I move the cursor to the next menu. It allows me to look at plots and look through folders, but that’s it. However, when I don’t go through python, and I call ROOT directly from the command line, everything works fine. I know one other Mac user who has the same issue and 2 who don’t. We can’t figure out what’s different between us. I’ve also tried switching from ROOT 5.34 to version 6 and had the same issue. 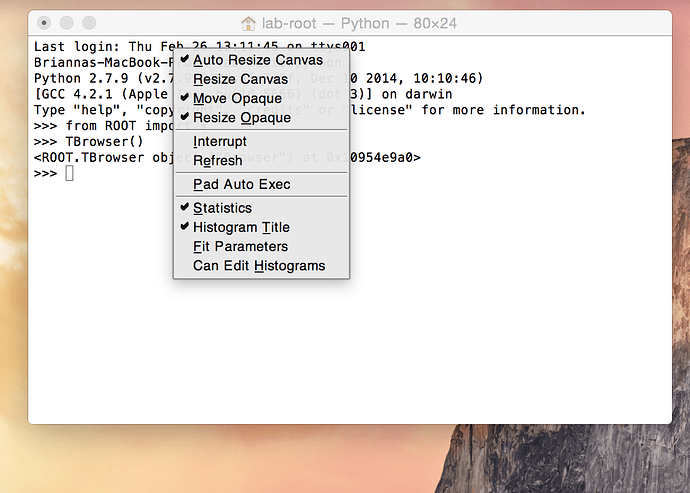 I am not using PyROOT usually. But I just tried on my Mac. With:

Then I can open the Browser. It looks fine. Some PyROOT expert may give you more details. I tried with both Cocoa and X11 versions.

Do something like:>>> b = TBrowser()to keep it alive (for the duration of 'b’s life time).

Thank you for the response, but I tried both of those suggestions and neither worked.

To clarify, it only happens when I try to alter a canvas through the TCanvas GUI.

To clarify, it only happens when I try to alter a canvas through the TCanvas GUI.

The only thing I can think has changed in the canvas GUI are the guidelines. Can you try to disable them
by modifying $ROOTSYS/etc/system.rootrc the following way:

[quote=“couet”][quote]
To clarify, it only happens when I try to alter a canvas through the TCanvas GUI.
[/quote]

The only thing I can think has changed in the canvas GUI are the guidelines. Can you try to disable them
by modifying $ROOTSYS/etc/system.rootrc the following way:

Thanks, I tried it, but, unfortunately, it still didn’t work.

Thanks, I tried it, but, unfortunately, it still didn’t work.

I am having the suspicion that it has to do with the python distribution I am using. (Enthought python.) Whenever I make matplotlib python plots together with ROOT plots, the behavior reported before gets even more erratic.

I was using the same ROOT version on my old OSX 10.6 (never upgrade a running system) and never had these problems. After I upgraded, I never got the interactive plots to work properly in PYROOT. If I just open ROOT itself, the plots are fine.
Brianna do you also use Enthought python?

I have the same problem. To be clear, the window is NOT actually being deleted. It just disappears for a bit. Annelles, if you click another Window, then click the Root icon in your dock, it will probably pop back up, as it does in mine. But still quite annoying.

I can launch python, import root, make a canvas like normal:

import ROOT
c1 = ROOT.TCanvas()[/code]
and all is fine… UNTIL I open anything that uses a modal window. So if I click “File” and “Save as”, the “Save As” modal comes up, but the original canvas disappears. At least, until I click another window, and relick the Root icon in the dock.

Would definitely be interested if anyone has a solution!

So I ended up having to reinstall my operating system for other reasons, but when I reinstalled ROOT, everything worked as it should!!

Here’s the method I used to install ROOT:

Interesting. I have the exact same setup as bstamas now, and the problem persists. The only difference is I installed Python 2.7 via an installer, not brew.