I’m trying to make a graph with different data sets and 2 different y axis scales. The first data set will use the first scale (which I want displayed on the left), and all the rest of the data sets will use the second scale (which should appear at the right). I am using TMultiGraph and I am very confused. The code I have displays both scales at the left and the right and puts all graphs on the second scale, so that I can’t even see the first data set. Here is the code I have:

Any pointers would be most appreciated. I have searched all the documentation I could find but I have not been able to find an example of this.

You need to create a second pad. Your example is not complete so It is difficult for me to modify it to make it work. Here is one showing what I mean:

Thanks for the reply. I have seen that example elsewhere and I tried to modify it to meet my needs but it doesn’t seem to work with TGraph. Is there any way I can do it with TMultiGraph or even TGraph? Thanks.

Thanks for the example. I put it in my program and got it working and I didn’t even need to use TMultiGraph.

I also want to draw some data with TMultiGraph. In the end it also should have two different y-axis.
My first step was the try to draw the y-axis at the right side with Draw(“LPAY+”). But it seems to me as if TMultiGraph ignores the drawing option “Y+” . Here I made a simple example:

I run your program “multig2.C”. If I understood it correctly, it was meant to set the boolean drawMultiGraphs from false to true, for the case I want to have it drawn with MultiGraphs. But if I do this, the result is the same, as before…the right axis is still on the left.
Can you help me?

Yes … Y+ is ignored… on workaround could be to draw a frame first using Y+ and draw the multigraph on top but you will lose the automatic scaling over the graph collection:

Thank you very much.
Then I’ll have to make the workaround.

Maybe a heretical question, but why TGMultigraph ignors Y+ and X+?

I do not know. I need to check. do you have a small reproducer ?

Sorry for answering so late but I was working on a different solution.
Actually, I wanted to create two pads with two multigraphs. One with two line graphs and the axes on the left and bottom respectively. The other graph should have a different y-scale, a line and a scatter graph (like in the picture). Since I needed custom markers (numbers like in the pic) I chose to use TLatex-text I just added to the pad with the respective xy coordinates.
In the beginning I tried something like this (very short version of what I remember what I tried):

I also tried different combinations of “LAPYX+” aso.
The next question would have been wether there is the possibility of custom markers. 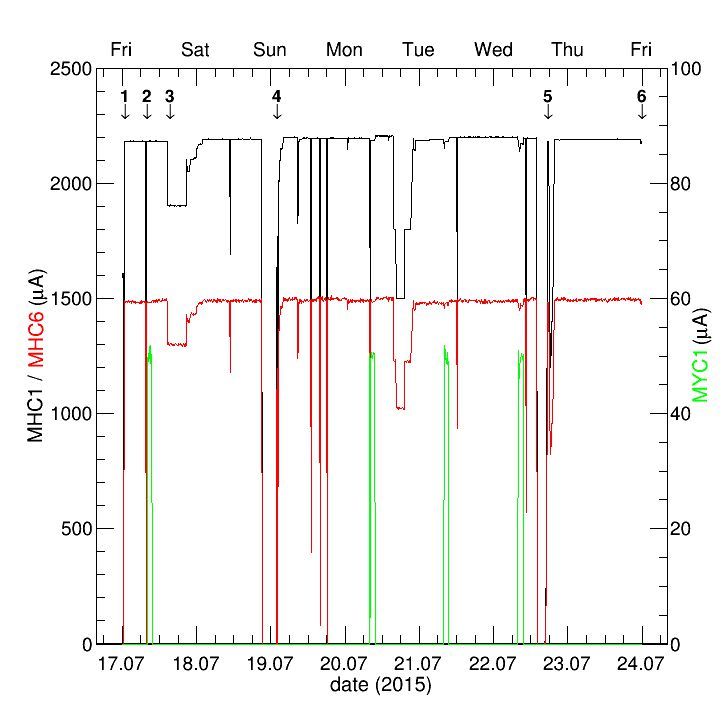 The next question would have been wether there is the possibility of custom markers.