I am using a TMultigraph to draw several TGraphErrors into one coordinate system:

However, when I draw the TMultigraph using

v_r->Draw("AP");
it is drawn with a competely wrong axis range on the y-axis so that I have to zoom in a lot in order to see anything at all.

Shouldn’t TMultigraph be able to infer the correct axis limits by itself? Or am I doing something wrong?

Thanks a lot for your help,

Can you send a small running macro reproducing the problem ?
Thanks in advance.

Ok, here is a shortened version of my script. The TMultigraph is created with only one TGraphErrors. The data for this graph are read from an ascii-file. I attach the macro as well as the data file for testing.

Thanks in advance for any hint towards the problem!

With your macro I get the attached plot which, seems to me, is correct (unless I missed something). Which ROOT version are you using ? on which machine ?

Oh, interesting. I am using ROOT 5.17/05 on an Ubuntu system (installed using the package that was available on the BNL mirror) and there, the result looks as shown below.

Which version did you use to produce your result? 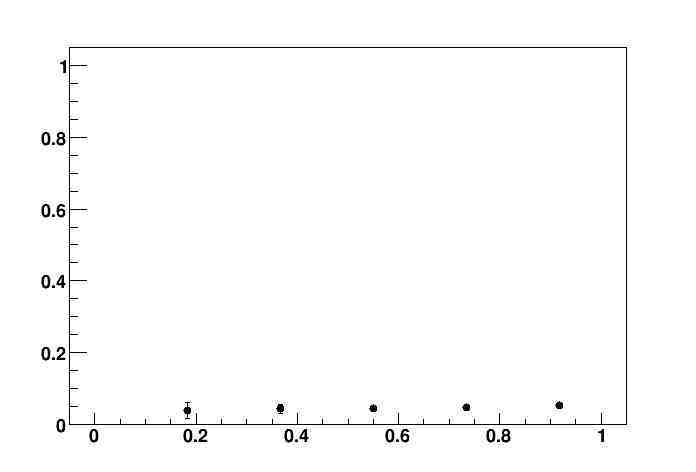 Yes… I understand why you are not happy with this result. I’ll try to dig in the ROOT history to find out is there is a bug fix which can explain why we get a good result now.

By the way, if you plot the graph directly, without using a multigraph, do you get the same bad result ?

I think you encountered this bug:

That matches with your version number. Can you try some more recent version ?

Ah, thanks for pointing me to this bug!

When I directly plot the graph, everything is fine, it only appears with the TMultigraph. I will just try to upgrade to a newer ROOT version, since it already seems to be fixed there.

Thanks again for your fast help,

I finally managed to compile ROOT 5.19/04. There, the TMultiGraph works perfectly, and I even can zoom into the x-axis when it is set to log-scale (which was actually another problem I experienced with ROOT 5.17)

Thanks again for the help!