a very nice example of a TH3 being drawn with OpenGL and dynamically sliced was shown in the release notes for ROOT 5.14/00 (http://root.cern.ch/cgi-bin/print_hit_bold.pl/root/Version514.news.html?th3dynamicslicing#first_hit, under “Dynamic slicing”).
Anyhow, one is referred to some sample code which illustrates drawing but not slicing. How do I get this magnificent slicing?

I did not find too much documentation on TH3 drawing using OGL. Is there now a possibility of projecting the histo onto the coordinate planes and showing these projections as color plots? Or some way of mapping arbitrary TH?->Draw() output to on the planes?

We are currently working (thanks Timur) to extend substantially this area to use the capabilities og GL to explore 3d, 4d and even 5d data sets.

Actually, I just found another question: Is there a gl drawing option to get rid of the boxes / bubbles? The plot below could be much more useful if they weren’t there (or if I could somehow cut through the volume). 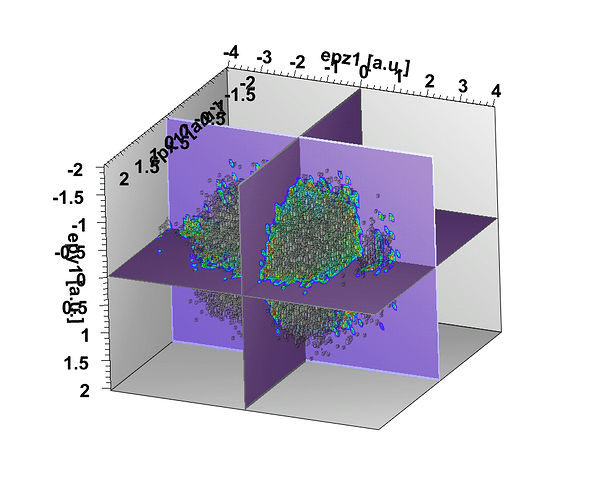 The boxes/bubbles are drawn in a semi transparent way when planes is moving. But you have a good point, in a such case it would be better to drop them.