Still having problems with GMT time on TAxis in TGraph

I’ve read a lot of the postings on getting a timescale on a histogram or TGraph axis, but I’m still having problems. Perhaps I don’t understand what is really going on…

If I manually create UNIX timestamps (seconds since the 1 January 1970 00:00:00 UTC epoch) and then plot them, they are still showing up in the local time (Eastern Daylight Time at the moment), EVEN if I set the time offset to use GMT

So the following code produces the attached plot

What I THINK should happen is the time markers should start at 15:00 and then go up 17:15, but the plot still seems to be doing the conversion to EDT.

Since I have done everything I can think of to stay in GMT, why is the axis still doing this? 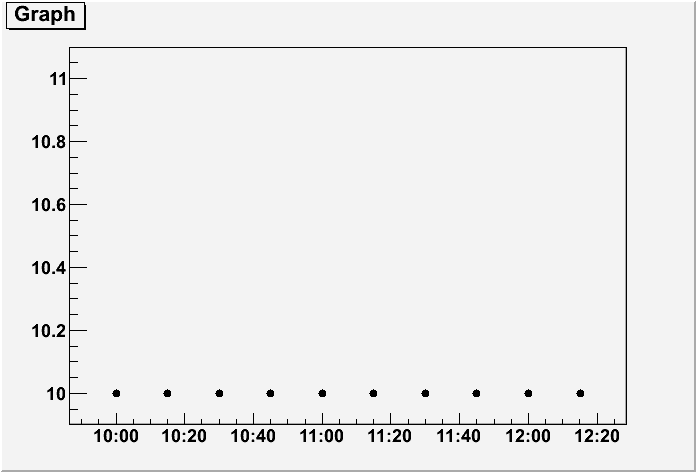 With you macro on my linux box I get a different picture (see attachment).
Have you tried to use TDatime as suggested here:
root.cern.ch/drupal/content/how- … time-units
Instead of doing the conversion your self ?

This is really my point. I’m creating times in GMT, and I want to plot them on an axis in GMT. And, unless I’m really misreading things, I thought the point of the “gmt” in the line

was to give me an X-axis whose labels would be in GMT and not pay any attention to the local timezone.

Here is an other example.