Shifting TMultigraph on x-axis to the same starting point

I want to shift TGraph to zero on the X-Axis. I am looking for a solution, where all the graphs should start from same point. Please find the attachment for more clarification of the problem.

My code is as follows:

OR we have some function for shifiting the TGraph? Guide me. 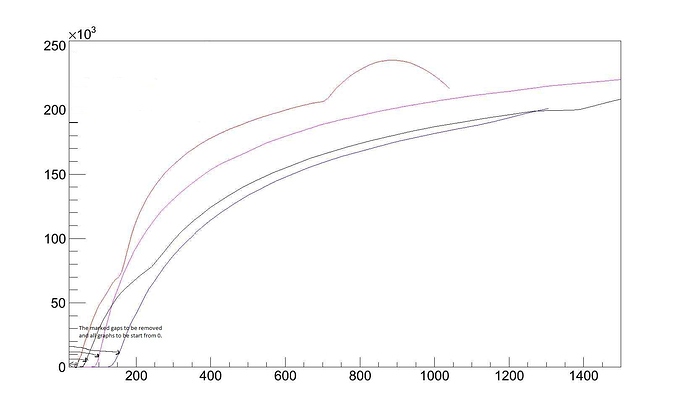 You should shift all the points of the individual graphs along the X axis. Changing the limits will not help.
A simple for loop will do it.

Thanks for the reply. You mean by using a for loop. I tried it but its not working. Would you explain it in detail?

Thanks for the reply.

@Wile E. Coyote : I used the tips gave by you in the code. But its not working.

Ok. I used it as follows:

But its not working. I am still looking for the solution.

But you do realise that you need to “shift” each of your graphs (i.e. one by one) and that for each of them you need to calculate its own “oldXmin”, don’t you?

Yes, I am calculating xmin and ymin values for each graph still there is no difference in the Graph.

Ok I guess, instead of trying to explain, a working example is better. Here it is:

Ok. We have to assign dx value. Yes, now it is working.
Thanks a lot.

I’m actually having the same issue, but wanting to re-scale the X axis of a TGraph. I am using PyROOT and I am wondering why the obvious solution is not working:

It looks like the x values have changed, but now it does not draw properly. Is there anything else I need to do manually to make it draw properly? I tried g.GetXaxis().SetRangeUser(), but it makes no difference. The axis that shows up is always the original one, so the new graph is off-scale.

Thanks, that works. I guess it’s because the TGraph is somehow converted to a histogram when drawn with the “A” option, but then that histogram sticks around?

The “A” drawing option creates a “dummy” histogram which is used to draw axes. Once it exists, successive calls to “Draw” will not “recreate” / “renew” it.
See also: TGraph::GetHistogram