Hello,
when I try to set the grid in a TCanvas (TCanvas->SetGridY())
with the Y axis with logarithmic scale, sometimes I get a grid line for
each axis tick and sometime I get a grid line only for 10^N ticks
(and not for ticks corresponding to 2,3,4,5,6,7,8,9*10^N).
Why? What is the criterium and how can I change it?

Thnk you very much!!

When the axis has more than 3 decades, the grid lines are only drawn on the powers of 10.

Could a flag be added so that the user can control this? In general I think only showing lines on the powers of 10 is usually preferred. Plots like my attached TauJet_Likelihood plot look much better than my attached TauJet_numTrack plot. The numTrack plot when scaled to be put in a talk or publication is nearly unreadable, but I would like to not have to give up the grid completely.

Thanks for the support.

Or perhaps make the default that the grid is every decade when more than 1 or 2 decades are drawn (not 3). Perhaps make this the parameter that the user can tune.

I do not think changing 3 to 2 decades will make a difference. Then you will have people complaining that 2 is not enough.

Right now it is entirely automatic. Seems to me your 2 plots look good. If you remove the intermediate level on TauJet_numTrack_J-b-overlay.pdf it will look really empty.

I see 2 ways to answer your question:

I do not think changing 3 to 2 decades will make a difference.

It would make a big difference. It would decrease the maximum number of grid lines in a plot by 10.

Seems to me your 2 plots look good.

It looks fine when it is a eps/pdf displayed large on your screen, when it is scaled to fit with 3 other plots on a slide, or to a small box to fit in a publication, it looks terrible with all the grid lines going across. See attached screenshot.

I see 2 ways to answer your question:

The issue is that these plots are just a couple out of many plots that I make in a scripted way. It would be impractical to draw the grid by hand for every plot. It would be nice if the gridding were smart enough to never draw so many lines that it interferes with reading the plot.

Thanks for following up. 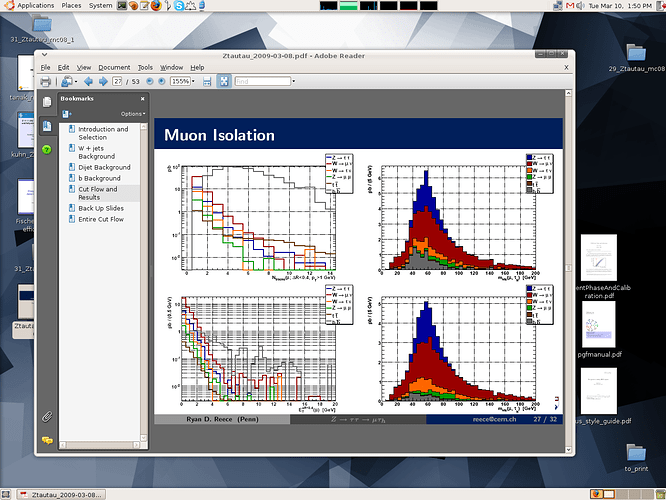 If you need it urgently , drawing it yourself will be the only way. I will try to make a example general enough to be used on many plots.

No, it is not urgent. Being that it mainly aesthetic, I will be ok just turning the grid off for plots that I make on a log scale.

I am mainly trying to request a feature for new releases: a way to control the griding, or a smarter automatic griding. Initially I think a possible solution would be to allow the user to set the maximum number of decades drawn before grid lines are drawn only on the decades. This could just be an argument in canvas.SetGridy(3) would set that if 2 or more powers of 10 are drawn on the y-axis, then only draw a grid line every power of 10.

Did anything happen on that subject?
My search through the class references yielded nothing, so I guess one should still use a custom grid in this case?

Yes nothing new on that. Like we have the TGaxis MoreLogLabels static setter we could had a DrawGridOnDecadeOnly … would that be a solution ?

Yes nothing new on that. Like we have the TGaxis MoreLogLabels static setter we could had a DrawGridOnDecadeOnly … would that be a solution ?

Sorry for the late reply, I kind of missed it:

Yes, definitely if it isn’t too much work. At the moment I don’t need it (built the grid manually), but I think that it would be useful in general (also for other users).