I have a multigraph to which I add many TGraphs with a mouse click.

You better write a macro…

Ok, the user add the graphs by pushing a button with the mouse

The script reads files creats TGraphs and adds them to a multigraph.
As you can see on the picture the scale is set to the last graph loaded, in this case the one with the smallest maximum (the blue one). 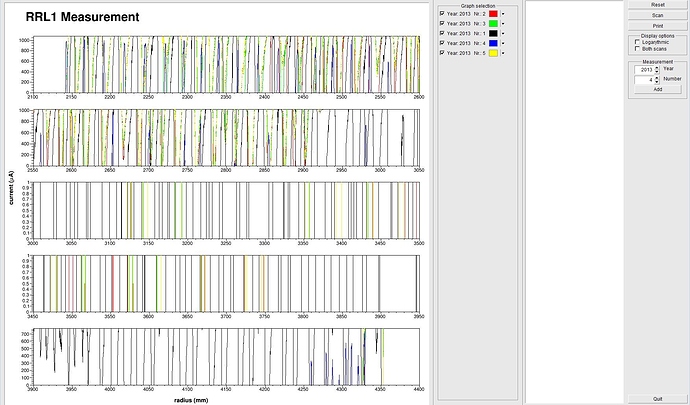 is needed for this pad

Is there no way to determine the maximum of all graphs in a multiplot?

As I said the Multigraph does it itself each time you draw it … you have nothing to do … Something should be wrong in your code … what happens if you try to change the graphics window size with the mouse ? does it update the plots ?

Actually, I set the pad no editable after I added graphs and updated the canvas. But I tried and the graphs indeed rescale.
What I would like is, that the user can only change the scale with the mouse (zoom in or out) but not enlarge it or accidantly move the pad/the graph around. What usually happens is that people click into the graphs and everything is messed up.
So half of the problem is solved when I change the order of setting editable, updating, adding aso.
Still I would be interested to find the maximum of all graphs. I guess I have to go through all of them.

Perfect, thank you.
I did’t find it because I was not looking at “histogram”. I should have read the doc more closely.