I am using a THStack for its nice features of automatically scaling the y axis limit to accomodate all graphs. However, this fails when the two graphs are on very different scales and (I think) if some bin reaches below zero.

Here is an example demonstrating the problem in PyROOT, but it also appears with equivalent code in C++:

The problem is, stack.GetMinimum() returns 0, so it doesn’t know what to use as lower bound. Therefore this is what is produced by this code:

Whereas I was expecting a graph where all data points (with positive values, which all are in this example) are visible, something like this: 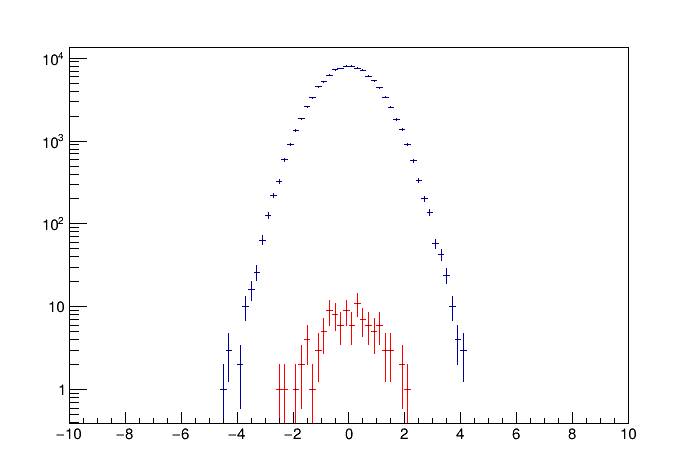 Your two histograms minima are 0. So the rendering in log scale is not possible as log(0) is undefined. Therefore, to nevertheless plot something, ROOT takes a percentage of the maximum as lower limit to render the stack. A way to control this would be to define a minimum for the stack. A small positive value like 0.1 …

Yes, I also realized this was the problem, but was hoping to find an automatic solution, because if I have to specify it every time, then the whole advantage of the THStack is lost.

This small (Python) function seems to do the job. I think behavior similar to this is more what you expect, because having some bins empty might happen quite often, especially if you pot multiple histograms on top of each other:

This produce this graph: 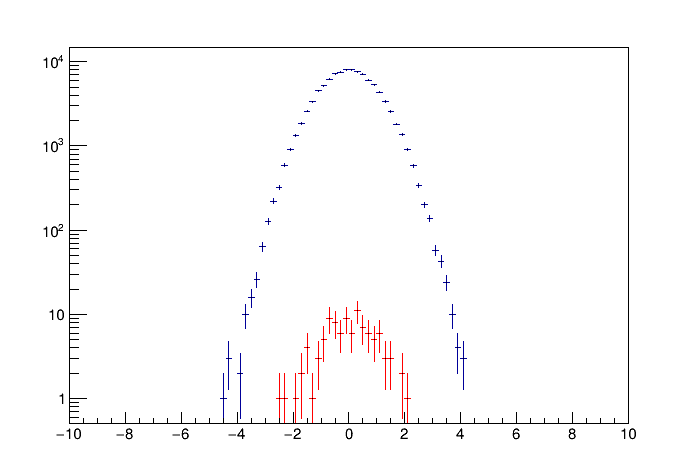 Interestingly, it still prints the minimum as 0.0, so I guess it always calculates it when calling stack.GetMinimum()?

I guess it always calculates it when calling stack.GetMinimum()?

Yes it does calculate it again.

Would it make sense to implement something like what I wrote above also in ROOT, instead of just taking some percent of the maximum value?

Yes that would be better I guess.

The redundant part after if (themin == 0.) could be outsourced into a TH1::GetNonZeroMinimum function if desired.

Thanks for the suggestion ! I will investigate it.

May be we do not need a new method to do that. An option in the current GetMinimum() will also fly.

The redundant part after if (themin == 0.) could be outsourced into a TH1::GetNonZeroMinimum function if desired.