I’m bringing up this issue.
A few days ago, XQuartz team updated XQuartz 2.7.8 and replied to my ticket that the version will solve the problem described below.
But, still the problem remains. So, I reopened the ticket.
If anyone experienced this or knew how to solve this problem,
please let me know.

You can reproduce the problem with mac connected to any linux server
and run ROOT and type
TEveManager::Create()
to open TEveManager via X forwarding.

Maybe I’m the only one suffering from this error.
The below is error message when I used XQuartz 2.7.7 with some TEve classes.

Is it because of XQuartz? It doesn’t show up when I used XQuartz 2.7.6.

Thank you in advance.

It works fine for me:

I can see the TEveManager window

This means my mac has some problem? or ROOT installed in my remote machine has problem?

Hmm, I don’t know where to start.

Can you try to do the same I did with lxplus ? If it works it means that your remote machine has problems. If not it means the Mac has an issue.

Thanks for the advice.

I tried on Scientific Linux 6.3 and Centos 6.7 remotely and
both gave me the same result.

This happens independent of LIBGL_ALWAYS_INDIRECT flag.

It seems that everything is working fine except TEve.

How about pure GL? I don’t remember of anything special Eve would do with GL.

Can you run with XSync set to true (in rootrc or via gEnv) in gdb and set breakpoint in ROOT’s error handler … then we’ll see which call actually gets the error first.

This is my comment on xquartz bug report which shows what went wrong before the fix
xquartz.macosforge.org/trac/tic … comment:11

As you can see, the gl context creation suceeds… and then when we try to make the context current the thing reports an error, as if it misplaced the handle that it gave to us during creation.

Could you give me a specific procedure what to do?

Since the only thing I do after running ROOT is just type in TEveManager::Create(),

just teach me how to set XSync on and gdb thing.

Thank you alot. I’m suffering this problem after I updated OSX to Yosemite and about to break my mac due to this

Don’t worry then … I’ll do it next week, it gets quite hairy

Each version gives me different bug 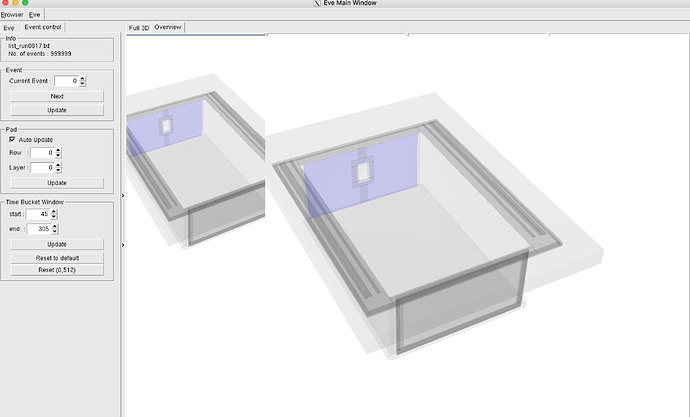 It seems that the problem right above your last reply is related to the graphics driver in OSX.

I tried to install Scientific linux and ubuntu on Parallels and

if I turned on graphics acceleration in Parallels, TEve crashes on both OSs.

Not simply crashing, X server restarted on both OSs.

LOL. I wish your efforts and Apple team can solve this problem.