Hi,
I am trying to draw a tree on multiple pads with different options. However, the results varied when I run the SAME code several times. The first one is what I expected: 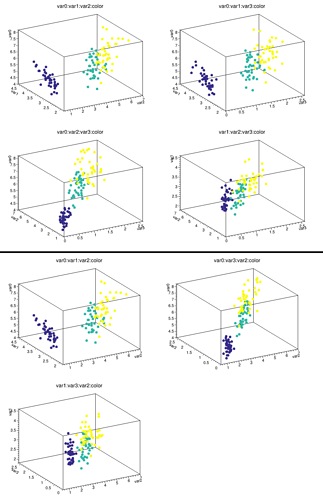 next_combination is a function I copied from StackOverflow which generates combinations of elements in a collection. I assume it worked just fine since I have tested it in ROOT prompt separately.

Here is the code I entered in the prompt:

Additional information may help:
I noticed that 4 graphs were drawn (the expected behavior) only when something was drawn previously, i.e. a TF1 function, but sometimes there were still 3 graphs drawn in this condition.
ROOT Version: 6.20/02
Platform: Arch Linux on WSL
Compiler: I installed the package from Arch community repository.

I have just noticed that the function I called in the prompt is an overloaded one of the macro I posted. I wrote it to pass initializer list literal instead of a vector. To avoid confusion, the overloaded one is posted here:

I do not see why you would get different plots if you do exactly the same thing several times: If you plot the same variables from the same tree using the same selections you should get the same plots. Do you have you a reproducer we can run ?

I tried to put all the codes in a single file but things changed again. When I load the macro file and run the macro file with command root rep.cc, sometimes 3 plots were drawn but sometimes 2. Anyway this condition resembles the one I described initially, so I just post the macro here.

Your macro seems to have a problem. Can you fix ?

The problem was possibly caused by the different ROOT compile options. I learned that the ROOT provided by Arch community repository is complied with C++17 option enabled so the macro works on my machine. I edited my macro to give DrawT() an explicit return type and this should fix. However, I can’t make sure about the condition on your machine.
rep.cc (1.8 KB)

You macro runs now. I get many warnings:

and the two following plots:

I didn’t read the entire row of the txt file so the trailing value caused the warnings. It’s pretty weird that on my machine I got this:

And this for another try:

And this for another try:

I run the macro by passing it as a command line argument: root rep.cc, so I do restarted ROOT each time and I never got a complete version with all 4 plots. It seems to be a platform related problem?

I tried but the problem remained. Thank you for your attention anyway.

Which ROOT version ? On which machine ?

I solved the problem in a even more weird way. After I separate the loop which generates combinations of strings I noticed that the problem occurred within that loop. It had nothing to do with the drawing but the combinations generated were incomplete. I modified my code as below and it worked. Still confusing about what caused the problem though.