Plotting 2D Histogram as a Plane Under a 3D Histogram

I would like to know if there is a way I can plot the number density histogram as a plane somewhere beneath the 3D histogram (e.g. at z axis = -50), such that I can convey both the number and energy density for each XY bin. I have attached an image from MATLAB documentation of the basic concept, except I am not looking to merely do a 2D projection of my 3D histogram, rather use a separate histogram.

Hope I explained that reasonably clearly! 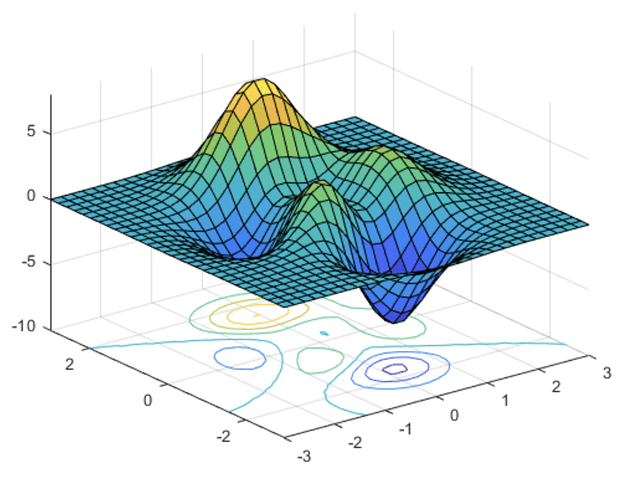 That’s not really easy to do. What I can propose is something like that: 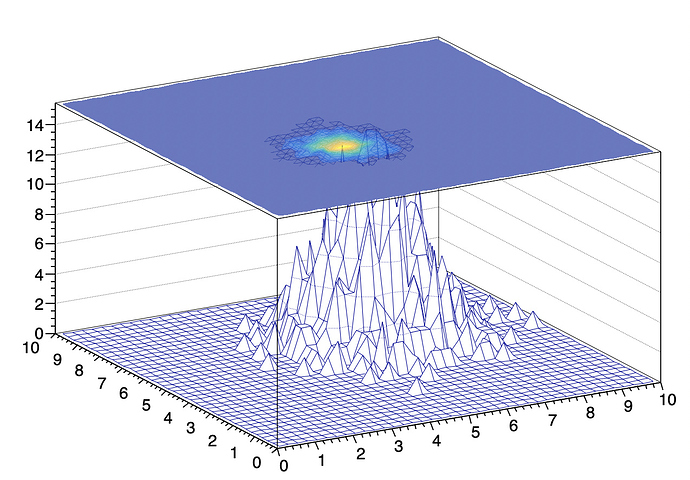 Thank you! That ought to do it

Almost there: Is there a way to set the zero colour of the 2D plot on the top to be clear? i.e. without the sea of blue… Then it should be perfect! I’ve attached an image of where I’m currently at. 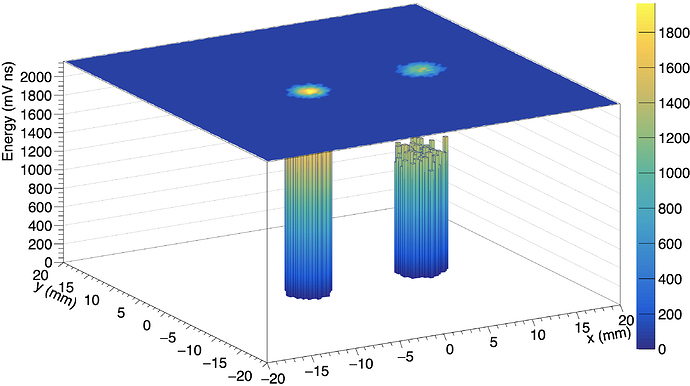 Is there a way to set the zero colour of the 2D plot on the top to be clear?

I don’t know if it’s possible with a draw option, but here’s a hack that may work for you

(I guess it only works if the “zero” bins are actually empty, not filled with zeroes, but I haven’t tested that).
When you get the final plot like above, save the canvas as a C file (e.g. “c1.C”). Then open that C file and look for a TH2 histogram that has a line with SetContour(xx), where “xx” is some integer. In a simple example, I find

Under that line there should be a list of “xx” (20, here) lines giving the “values” for each contour, like

Now, just change the value (second number) of the first contour to something greater than zero (but less than the value of level 1 (3.15 in the example above); e.g.:

Save and run this new macro to reproduce the plot; the blue will be gone! 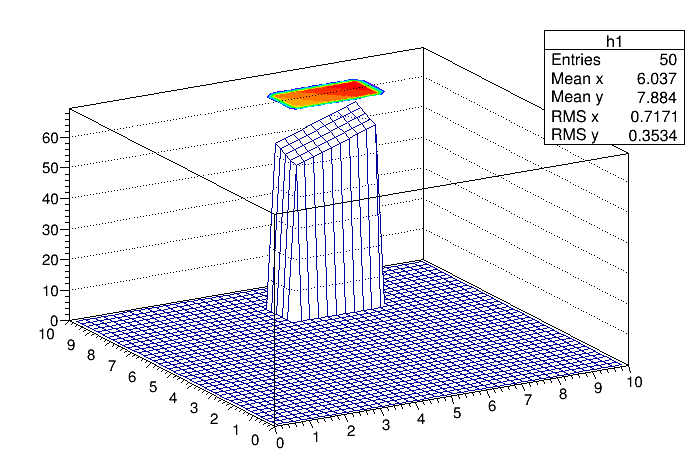 Hi there – thank you for the response!

Indeed my 2D histogram is filled with a bunch of zeros, a necessary consequence for when I construct the histogram. Therefore using your fix just changes the blue to white, as shown below. I do iterate through all the bins when I make this histogram, perhaps I can set a bin to be “empty” instead of setting to 0 as I currently do?

That being said, it would be ideal if this can be fixed with a simple draw option! Though I can’t seem to find anything in the documentation for THistPainter…

EDIT: I have just tried to make a new 2D histogram filling it only with actual entries (essentially just skipping the “SetBinContent->(binNum,0)”), and unfortunately the same problem persists with the zero colour being white rather than clear. 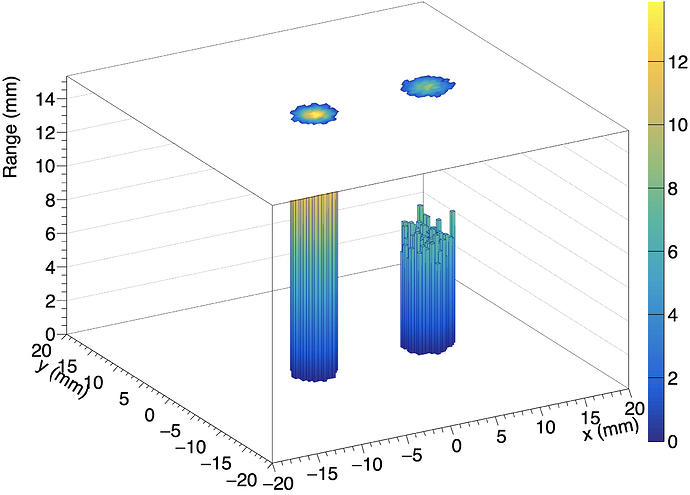 Are you sure you are not initialising the histogram somewhere else?
This is the code for my example:

See if following the recipe you also get a solid white in this example. If so, then it could be your version of root (I ran it in root 5.34/36 on Windows 10, and root 6.14/06 on Xubuntu and both give the same results), or perhaps something in a configuration file (rootrc)? but here I’m just guessing, the developers or others may have better ideas.
EDIT: by the way, are there negatives in the histogram? Maybe this is why even avoiding the zeroes, the negative bins are being shown as zero, i.e. white. Try skipping those too, only do SetBinContent for content>0.

I have tried your code and I do produce the results you obtain – so no problem there.

I’ve found that the issue arises from which order you choose to draw the histograms. Once I’ve created my histograms, I draw them using:

Where hist is the 3D histogram illustrating the average energy of particles in each XY bin and hist2 is the 2D histogram containing a simple number density of particles in the XY plane. I am using pre-compiled code and so I require the use of a TApplication to generate the canvas.

If you choose to draw hist2 first, then you obtain a clear ceiling (see attached image). However, this causes the z-scale to change to that of hist2, rather than hist as in the original plot, and is therefore incorrect. Remember, the 2D histogram contains a simple number density of particles in the XY plane. Choosing to draw hist first gives the image attached to my previous message.

Also note the strangely placed z-axis ticks (the dotted lines), which seem to suggest some overlay of ticks from both histograms. It is also worth noting that any controls to adjust axis labels etc. through the ROOT editor are non-functional, for whichever order you choose to draw the histograms.

So close yet so far…! 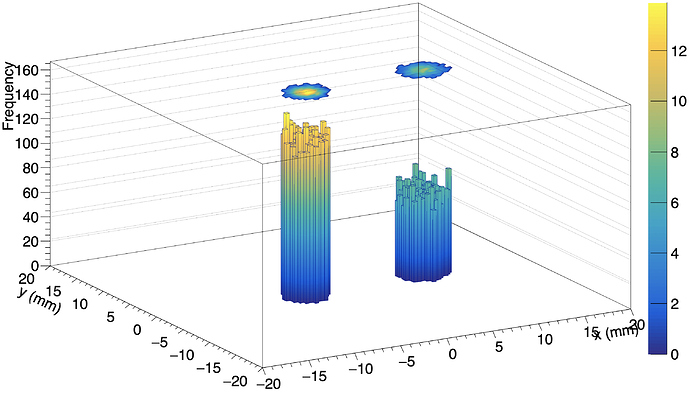 To hide the double grid lines, try setting the max and min of both histograms to the same:

Thank you @dastudillo for your continued assistance

Slight miscommunication: the colour scale on the previous plot is fine, the only issue is that the z-axis is that of the 2D number density histogram, rather than the 3D energy (range) histogram.

Setting the maxima and minima as you suggested does fix the double line effect, but leaves the histogram bars as small stubs on the ground, as we’ve set the maximum to be much higher than the maximum value in the histogram.

Perhaps @couet’s original solution may have a simple draw option to solve the problem?

Perhaps @couet’s original solution may have a simple draw option to solve the problem?

Can you post your script as it is now ?

It is as shown in post 8 of this thread. Hist can be any 3D lego plot and Hist2 can be any 2D surface plot.

Do you have the macro producing the following plot ? I am not able to reproduce it. 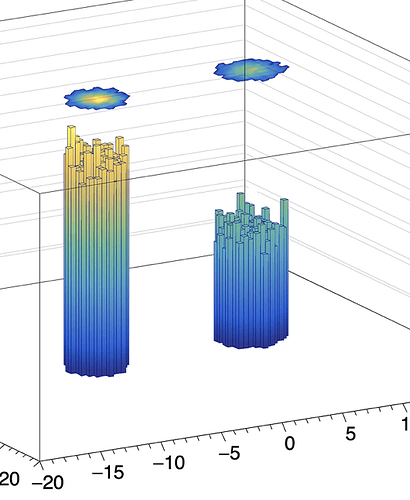 From the previous code I sent in message 8, you can reproduce the plot by putting the line

Apologies as I am unable to put together a full working macro together at the moment.

May be you can start for the original macro I sent ?

I do not understand how you can get this plot with a first plot done with option same.

Here is the version of your code I use: For some reason you need to set the contour level to something like 60 to get the white background to show up, otherwise it stays blue…

This produces the following plot: 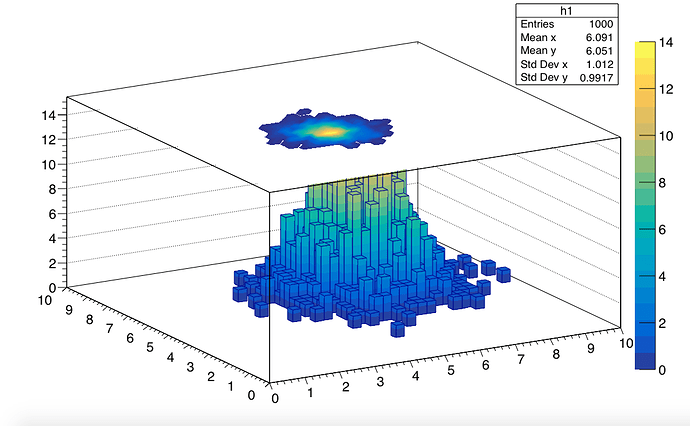 If you choose to draw h2 first, just by swapping the order of the draw lines, you get this plot: 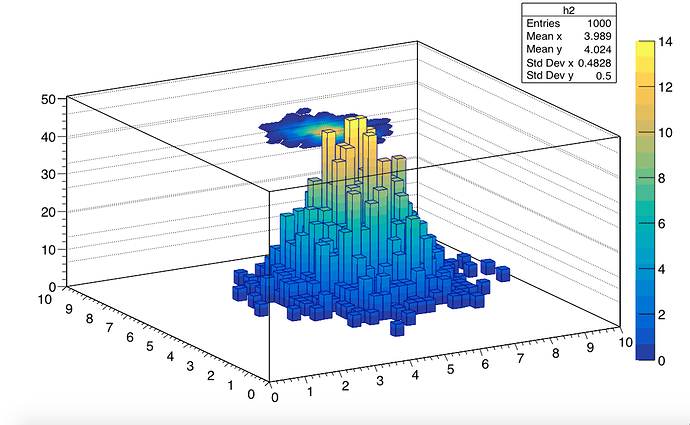 I think this approach reaches its limits. A modification of THIstPainter would be needed. The option same with CONT already works on a surface but the contour is not drawn on top it is drawn in 3D, A new mechanism inspired from this one, but with contour on top, would be needed in THistPainter.

Ah that is a shame. Hopefully we could see something like this added in the future?

For the time-being at least, I’m able to make-do with the white ceiling, but just moved higher up in the z-plane to make the bars beneath fully visible.

Thank you @couet and @dastudillo for all of your help!

You’re welcome. Sorry I couldn’t be of more help; anyway, I’m glad you have at least something usable

Indeed I found a way to do it:

may be the macro can be simplified a bit … 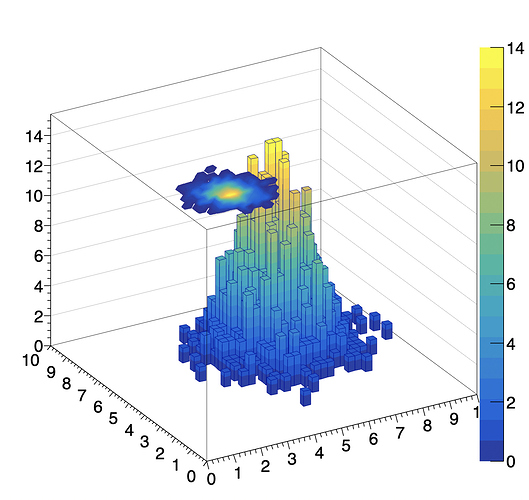