Inside the runScript.sh I (amongst other things) am trying to run a root macro. Normally when running the root macro it is done like this:

When I am running locally (i.e on lxplus) but within the runScript.sh it is run like this:

However, I am now trying to run on HTCondor and not sure how to adapt the command for the runScript.sh. I pass in the variables to the runScript.sh as follows for example STRINGNAME, so I was hoping something like:

would work, but it does not. I keep getting errors like:

I am not sure how to correctly pass in the variables.

I am not sure if HTCondor environment is similar to what we have in a shell script but the following is working for me.

I have tried this, and other variants but it hasn’t worked

No that doesn’t work either

the correct way may depend on the ROOT version - which one are you using? There was a very relevant change between ROOT versions 6.16 and 6.18…
Maybe

are the curly brackets supposed to be missing?

Yes, and I have a working example to prove it.

…and what about the second ‘_’ in the variable name?

Nope, that was a mistake

Unfortunately none of them worked. In each instance I got the following error:

This is on Condor, right? Can you do ls -l right before that to ensure the Ratios.cxx exists indeed? And which ROOT version are you using?

That sounds like (in addition to the paramater passing?) you have a file location problem. I.e. the file may or may not have been copied to the worker nodes.

Yes the root macro exists and is in the right place.

The problem is passing in the variables correctly due to Condor. I have no issue running the script locally, but the syntax to run on Condor is different, or at least I think it is, and so it will not run.

the syntax to run on Condor is different

That’s doubtful… I guess we need a minimal working example to debug things ourselves. Is it possible to provide one?

To run the script I do

But there is no submitScriptTEST.sh attached, is there?

What is the condor output is instead of calling the macro you do:

It isn’t really possible to provide a minimal working example as I am running with four different scripts to produce my output. But I have provided the runscript and the ratios file. However, as I cannot upload .sh files I have changed the runScript to a .cxx file, similary for the submbitScripts I have changed their extensions. I have commented out a lot of stuff in the runScript (it won’t run anyways as the .sub script takes in a tarballed up build and source directory containing the code to run), but at least one can see what I was trying to do.

Currently everything works (i.e the parts commented out), except for running the Ratios macro

To run the script I do

EDIT: I’ve since put the original file names back, the .sub file now has a .txt extension and everything else is .cxx (but should be .sh for the runScript and submitScript)

I connected to the node that the script is running on, and as you can see the Ratios file is there from the image 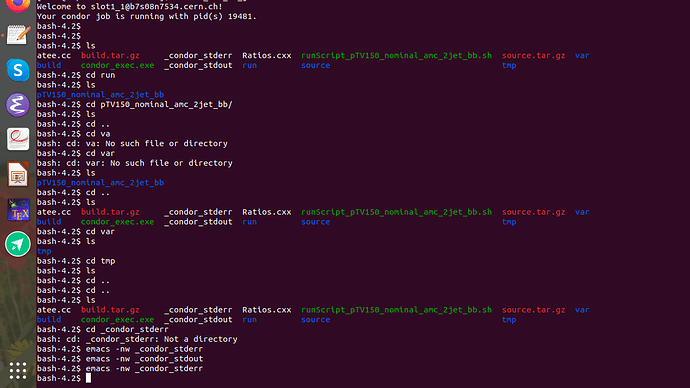