Large data entry, additional entries appears from no where in TBrowser()

I have tried check the branches and leafs of the tree in root, I could not figure out what the cause. I figure it may have to something to do with the code i written(below).

a portion of the csv file

Has anyone encounter this before?

TTree stores a snapshot of the TTree header after a while ("ntuple;1"). When you store it there will be another “cycle” added called "ntuple;2". The most recent can be accessed as "ntuple" (i.e. without cycle number).

(And yes that’s a bit arcane; we are “fixing” that with the new interfaces / nicknamed “ROOT 7”.)

Hi Axel, Thanks for the reply.

I am not very sure what you mean there.(still rookie root user >.<). Does that mean in the actual root file it is still the same 7,000,001 entries? 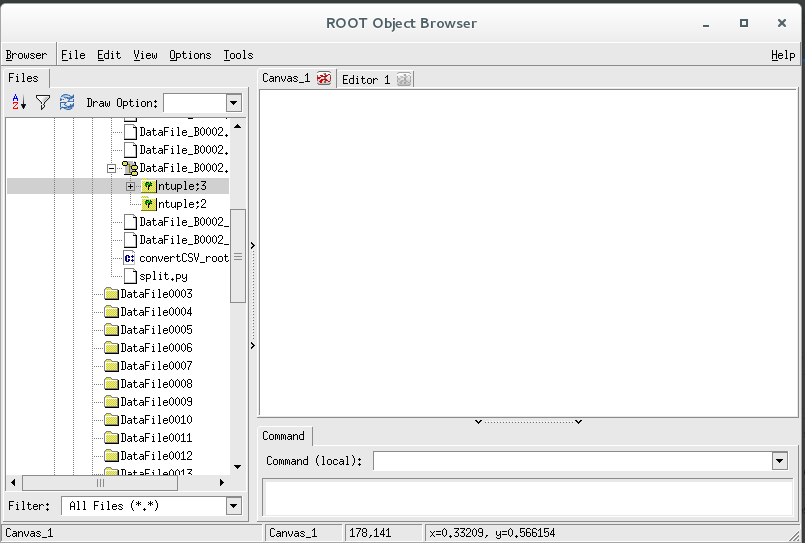 are the entries still the same as the original then?

This means that while you fill the tree, ROOT creates backups / snapshots of the tree in your TFile, once a while. Then when you call file->Write() it will store yet another (the final) snapshot. The snapshots are numbered, separated by ;. The last snapshot supersedes previous ones; it’s thus enough to look at the last one.

There is an additional “helpfulness” in ROOT filling TTrees: if they become too large (2GB), ROOT will switch to a new file and will continue writing the TTree into that. The files are numbered; “out.root”, “out_1.root” etc. You can call TTree::SetMaxTreeSize(100000000000LL) to set that point to 100GB.

Thank you very much Axel, now I get it.

*A follow up question that is unrelated to the title.

So now I have a .txt file that contain the start time(a constant value) and I want to add to the “Time” branch which is from 0ms to 7000s with an increment of 1ms.

Is there a way in root that I can do what I described and change that into UNIX time format(or something similar to it).

Can you be more explicit in what you want? Where do you want “UNIX time format”? And what is that - a string representation?

Okay I will remember that next time. Apologies if it was not clear before.

and so on. After this I would want to convert that date and time format to Unix time(aka Epoch time). example:-

To do this conversion you can use:
https://root.cern/doc/master/classTDatime.html