I have a surface plot (TH2F - option SURF3), similar to the attached file. And I am trying to insert a horizontal plane at a certain z value (say 200 for the attached file), such that the plane is only visible till it intersects the peaks of the plot. But I am not able to do so. I was able to insert just a plane at the desired z value, but it goes through the peak and looks like a mess. So I was wondering if it is possible to insert such a plane in TH2F figure in ROOT.

Another (maybe too ambitious) thing I would like to do is, project and draw the shape of where the said plane intersects the peak on the filled contour view drawn on the top. I am not sure if this is possible to do in ROOT. But I am open to any ideas.

Thanks for your time,
A 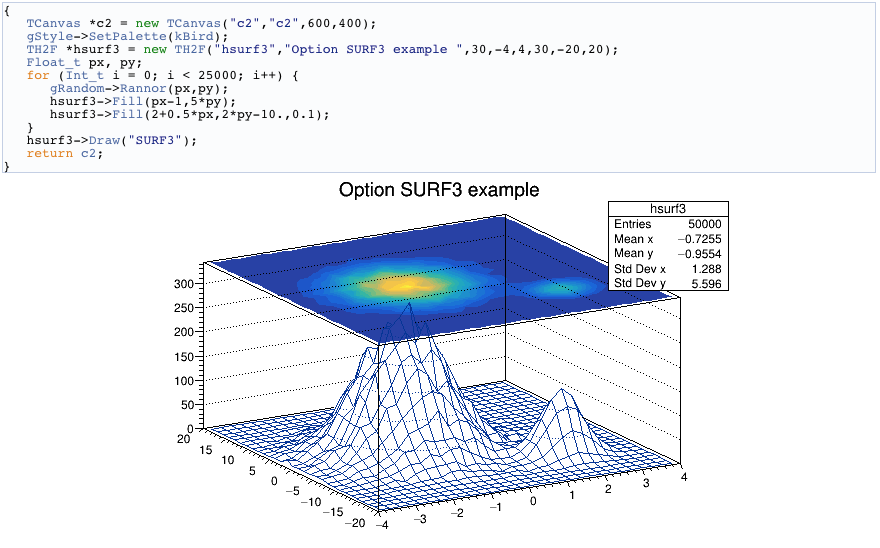 Inserting a plane at z=200 and drawing it with hidden surface would imply the plane to be part of the scene et and drawing will need to be done in one go (surface and plane) . Therefore you end up drawing a 3D scene with 3D objects and the option SURF3 is not appropriate in that case. You would need something like a TGeo.

Thanks for your response.
Is there an example of such graphics done by TGeo that you have encountered previously?

No I do not have such example. That was just an idea. I said “something like”… meaning that you are looking for a real 3D scene which would require a 3D package describing a scene …
So what you would like is to shift the plot on top at z=200 ?

Oh thanks. I will do some digging and see if I can figure it out.

In one sentence, what I want to do is: add a 2D plane at z=200 to describe a threshold or cut-off, like everything above is important and everything below is not.

I am just thinking that if you draw the plane with a transparent color it may work as you wish ?