Hello,
I have currently a strange problem. When I type these commands

I see the same with another plotting option. It looks like a TTree/TNtuple issue. 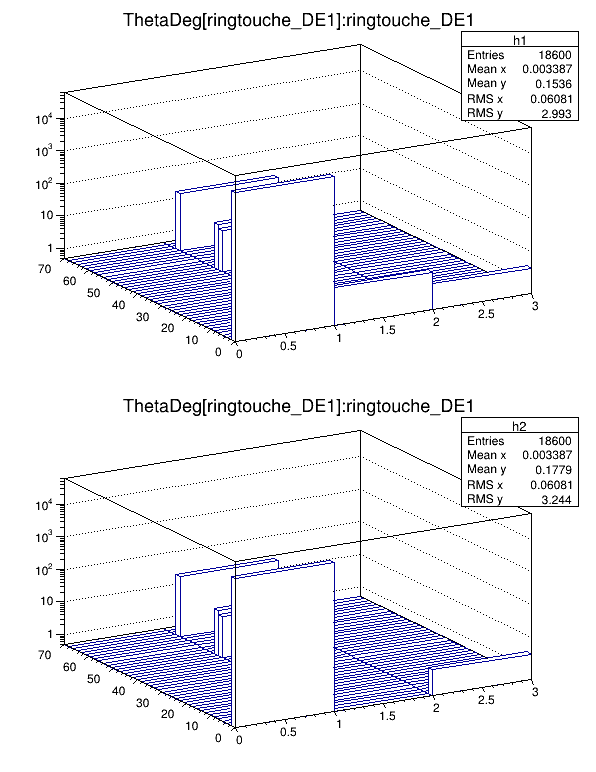 I see the same with another plotting option. It looks like a TTree/TNtuple issue.

The two Draw calls produce a different list of entries

It would be nice to have that fixed and also to hear some words on why and when this happens. I would like to make sure I understand any data loss in unfixed ROOT versions.

There is two related problem. First the command:t->Draw("ThetaDeg[ringtouche_DE1]:ringtouche_DE1>>h1","","colz") is very unlikely to be what you meant to get. The branch is defined as:*Br 42 :ThetaDeg : thetaDeg[ringtouche_DE1]/F *i.e. an array with exact ‘ringtouche_DE1’ elements whose index range is 0 to … ringtouche_DE1 exclusive. The second problem is that there was a missing protection in this case of out of bound access. The result was random rather than being all zeros.

You might have meant either:t->Draw("ThetaDeg:ringtouche_DE1>>h1","","colz")to plot all the values of ThetaDeg vs ringtouche_DE1[/code]or you may have meant

PS. The missing protection has now been added to the repository.

Thank you for the explication. I did not think about the size of the array.