tl;dr: Suppose you have multiple y values for the same x value in a TTree. Is there a way to get a CANDLE/VIOLIN of the y values at each x using TTree::Draw("y:x")?

Since TTree::Draw("y:x") creates a TGraph, the answer is “No” because a TGraph cannot be drawn as a CANDLE/VIOLIN. In fact, the output of TTree::Draw("y:x","","CANDLE") is two candles, one for y values and one for x values, which makes some sense.

That said, an ensuing gDirectory->Get("h")->Draw("CANDLE") works like a charm, so not all is lost.

So, all in all, I was wondering if this is all expected behaviour and if I am going about it in the most efficient way.

Not true you can create an histogram. See the doc.

Yes, a TH2 is created, but it is not displayed; what is displayed is the TGraph (with the axes of the histogram…) Perhaps I was not clear when writing my original post?

I think that my question can be phrased as:
Is it consistent/expected/intuitive that TTree::Draw(“y:x>>h”) displays a TGraph instead of the created TH2? 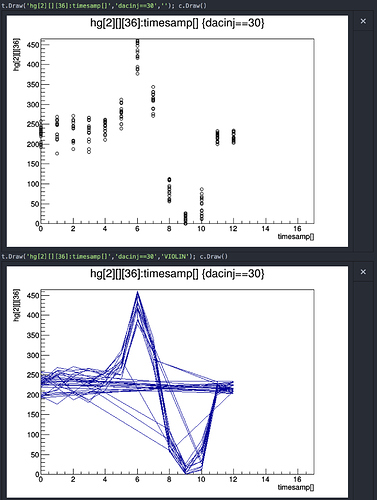 Not sure how to parse:

You cannot mean “ROOT generates […]” because that is falsified by the example I posted.

Perhaps it is just that VIOLIN was forgotten in the this particular bit of TTreePlayer::DrawSelect logic as it is not handled earlier, together with optcandle.

perhaps it could (should?) be

I am happy to make PRs instead of wasting time in the forums, but I want to make sure that I am not going against some design decision.

If T is the TTree and H an TH1F or TH1D you should do:

The VIOLIN option is valid when you draw an histogram. It is ignored (actually it is taken as “L”) when you pass it to TTree::Draw()

You can also do (it is even simpler because H is not needed):

Thank you for engaging. Unfortunately, all the aspects mentioned were already known from the outset.

I would appreciate a direct and clear answer to whether TTree::Draw("y:x","","VIOLIN") was meant to be displayed as a TGraph or if this line of code, instead of

May be I was not clear enough. Let me try to explain better.

There is two different options CANDLE, one for 2D histograms and one for trees/ntuples.

The CANDLE option for histograms is based on bins and is described in details in the reference manual.

The option VIOLIN is a “friend option” of the CANDLE option for histograms. It is valid for 2D histograms only. When you pass it to TTree::Draw it is not interpreted. Only the “L” of VIOLIN is seen, which explains the line plot you get.

So if you want to get a VIOLIN plot from the 2D histogram produced by the TTree::Draw() command, you should proceed as I described previously.

For curiosity I applied the patch you suggested in TTreePlayer. All I get is a ROOT crash.