I’ve been seeing a bias in the fitted mean of the distribution when doing a maximum likelihood fit to toy datasets, generated from a PDF with asymmetric tails.

I’ve attached the code I’m using, demonstrated on a Crystal Ball (CB) function.
To summarise the operation of the code:

Has anyone ever seen this before? Does anyone know how to fix it?

The things I’ve tried so far are:

this is not a binned it, is it? There is a known bias in binned fits when the number of bins is low.

No it’s an unbinned fit.
I’ve attached a plot showing the bias in the fitting of mu vs number of events for a CB with parameters mu = 0, sigma = 1.5, alpha = 1, n = 1.2.
Note that the only free parameter in the fitting is mu, all others are fixed. You’ll see that up to 1000 events there is still a bias. I’m aware that a maximum likelihood estimator should have a bias proportional to 1/N, hence the fit. But as you can see, it doesn’t seem to follow this pattern.
I don’t think that this problem is specific to the CB. I’ve also observed a bias in three other asymmetric functions, namely: Novosibirsk, Landau and Double-tailed CB. The first two I have only checked at 100 events, but the latter I have checked more thoroughly and it shows a similar pattern to the CB. 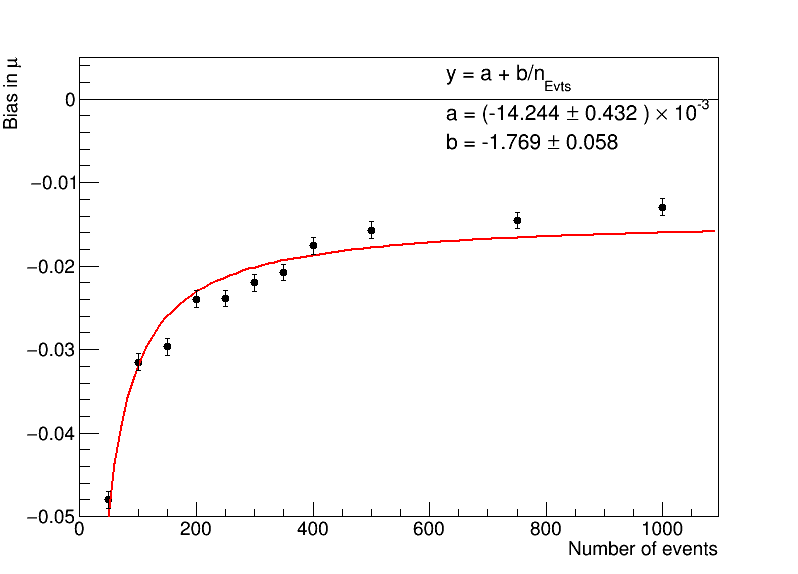 No idea what might be causing this. Maybe @moneta knows?