so practically, I am trying to plot the “SUM” of the THStack with “white” color, so to properly set the axis range, and then plot the THStack as well, but this fails giving the attached plot where the THStack is not properly shown… Any advice ?

Also, how could I force the top plot to have aligned margins with the bottom (ratio plot) one ? 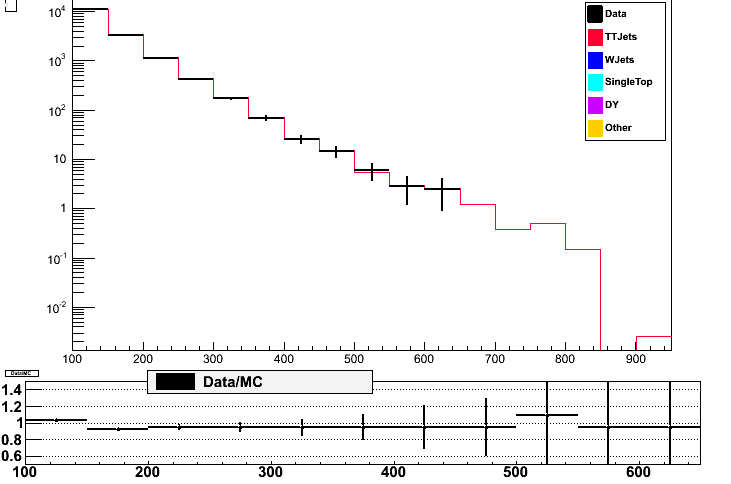 What you are doing sounds a bit strange because the aim of the THSTack is precisely to set the proper axis for a set of histogram .

Can you provide a small running example an not just a part of your code ?

Well , the part of the THStack is really simple

then I add all background sources

So, drawing directly the THStack, results in a plot where the axis range are the “full” and not set according to hsum->FindFirstBinAbove(0),hsum->FindLastBinAbove(0) - What I do now, sets correctly the axis range but without plotting correctly the THStack on top - For simplicity, I dont put the code for the ratio, but this is trivial and anyway works as expected - is the top plot that I cannot get it to be displayed properly.

Tanks for the explanation but I still believe a small running macro I can work with, would greatly improve the help I can give you.

I would prefer something I can run.

Please, find attached a collection of files - First rename the .txt to .tar.gz, untar and then simply run the Overlap.C

Ok … here is the simplified version I made from your example. Seems to me it is fine. Can you tell me me what you think is wrong there ?
Overlap.C (7.65 KB)

Thanks for your time on this ; So, although you do (like I did in my original code)

[/code]
you get something like the attached plot, ie the “hs (=THStack)” is not drawn, just the hsum (the sum histo from the THStack)

Hope the problem is clear now

The attached is ok. I think SAME instead of SAMES was the trick.
Overlap.C (7.22 KB)

Indeed, this did the trick - But now a new problem appears - Look at the attached plot - The ticks in the axis have been stripped, looks like the THStack are drawn on top of the Canvas or something like this - Maybe this is a ROOT bug or something?