Accessing the value of pi in ROOT

I can’t access the value of pi in root though many tutorials/examples show its active use. I have also tried using TMath::pi

I saw in many examples which used the constant simply by writing ‘pi’. Can you explain that in case?

In that screenshot of yours you do not seem to be in a ROOT session, it looks more like a cmd.exe session.

I saw in many examples which used the constant simply by writing ‘pi’.

Can you maybe point us to such example?

yes I had accidentally uploaded the wrong pic, I have corrected it now

Can you point one of this example ? In such examples the variable pi should defined somewhere. Have a close look at the code.

Again can you point one of the examples where “pi” is used ? thanks. 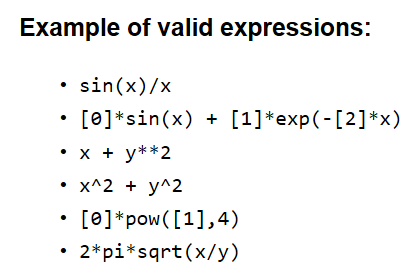 This is a snip from the same as mentioned
Please mind the last line
However I cannot yet find the use of pi in any of the examples.

This was apparently taken from
https://root.cern.ch/doc/master/classTFormula.html
, and it says the following below:

yeah, apparently that would mean that TFormula:: pi would give us the value, right?

I should mention that one way of doing your work is define
auto pi = TMath::Pi(), but that is a different matter altogether.

yeah, apparently that would mean that TFormula:: pi would give us the value, right?

No, the pi is not a member function of TFormula.

Then how does the page suggest we use it?
There are no clear examples

You can e.g. construct a TF1 object using operations/functions (including the pi) defined in TFormula, for example: