Im a complete newbe at root. I was looking around the forum to find out how to set up VC++ (WinXP) in a way such that I can use the root framework within VC++. However everything I found was to complicated for me or it didn´t work. So I would be very greatfull if somebody could explain to me how to do so. What Im trying to do is write programs in VC++ and using the root classes. Id be very thankful for your help.

Im a complete newbe at root. I was looking around the forum to find out how to set up VC++ (WinXP) in a way such that I can use the root framework within VC++.
Laura[/quote]

Ok thank you very much,
so I now installed VC++ Express 2008. I used root builder to create my project. I then manually opened the root_build_project file with VC++. I then click build and get the following error message:

My plan is to create a project that lets me run a code snippet like the following out of VC++:

Thanks for your help in advance,

This is really strange. Just to check, I did the following:

My error message is:

Does somebody know how I can fix this?
How should I create a makefile?
And what exactly means: 1>make: *** No targets specified and no makefile found. Stop.

Thank you for your help

Oh, cmon, this is really trivial.
You start ROOT Build Builder dialog. I’ve attached the screenshot. Let’s say, you have root source tree on C:\root and you have visual studio 2008 (yes, by the way, you need root’s source code, do you have it?).
In this dialog, you have to: specify the correct path to existing root source code, select version of MSVC, press button Generate Project. I’ve marked this in red. After this, you have to go to your $ROOTSYS (C:/root), open the generate VC project, and start the compilation. That’s all.

From your error message I can see, that you generated the project somewhere else, not in a root source dir.
Or, may be you have problem with source code? How and what did you download? I have an SVN trunk version of ROOT. What do you have? 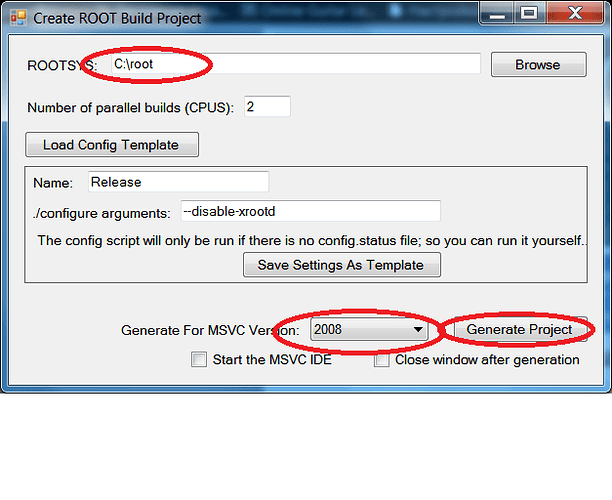 just as a side note: ROOT (e.g. 5.28) compiles just fine with MSVC 2010. Laura, you are welcome to have a different opinion on what Timur finds “really trivial”

Please let us know if you continue to have problems building ROOT.

I am noob on Root and i try to use the root builder for visual c++ 2010. So, i have an error mesage when i clic on generate project. This message is in attache file.
can you help me please

Hi Jeremie,
Interesting. This particlar crash indicates that root builder was unable to track down the location of the Visual Studio 2010 install. If you don’t mind, I have a set of questions for you:

What is happening is root builder is trying to figure out where 2010 is installed, and then use that to make sure that the proper environment variables are defined when the make command is issued. So far, the most robust way of doing that has been to look at these registry entries. The bomb should be better - I should throw an informative error rather than just that null pointer error you are seeing. I’ve added that to the list of things to fix for the next version. Thanks!

Firstly, thank for your quick answer.
Secondly, I work on W7 SP1 32 bits and i have Visual C++ 2010 express edition (up to date by windows update automatically). I find the first registry key but not the second. but i have found this key :
classes\VCExpress.AddIn.10.0\shell\Open\Command

Hi,
Fantastic. Ok, so that is the bug - it isn’t setup to detect express correctly. Let me look at the code a bit more and figure out how much work I need to do to get around that problem…