I am using a TGraph2D class to plot some 3D data.

If I directly set the points or read a file I saw some zeros that are not in the data.

After investigation, I realized that if I am using a data set smaller (fNpoints <= 483) than the real one (several hundreds) the result is the one expected (with the limited number of points of course).

My question is: is there any limitation on the number of points and if yes how can I extend it ?
I am using ROOT 5.34/18

“several hundreds” should not be a problem at all

Hi, I’ve got a TGraph2D with 1000 data points, which doesn’t seem excessive to me, but Drawing the object takes a very long time, even with the default drawing options. Is 1000 points too much to draw the graph reasonably quickly? Are there some drawing options that could be recommended for large graphs? My graph can be recreated by doing “.x graph2d.C” using the attached macro, then you can draw it using whatever option you wish for testing. The points are in a regular grid. Is there a bet…

[image] There are some holes when I draw a TGraph2D. There is an example in the attached root file. You can reproduce the problem by doing: graph2Dexp68->Draw(“P”) graph2Dexp68->Draw() You can see the holes along the x = y axis. output_file.root (6.88 KB)

Thank you for your quick reply but speed is not exactly the problem.

Furthermore, it does not depend on the type of draw option I am using (even w/ “TEXT” I can see the zeros)

However the post you pointed me at does indirectly suggest that there is a internal limitation, since my colleague is using there thousands of points.

Why don’t you post the file with your data and a small macro which creates the graph, so that one can reproduce your problem.

Attached is a data file for example (tmp.dat)

The code I used to draw the attached picture is:

where you can see the zeros. 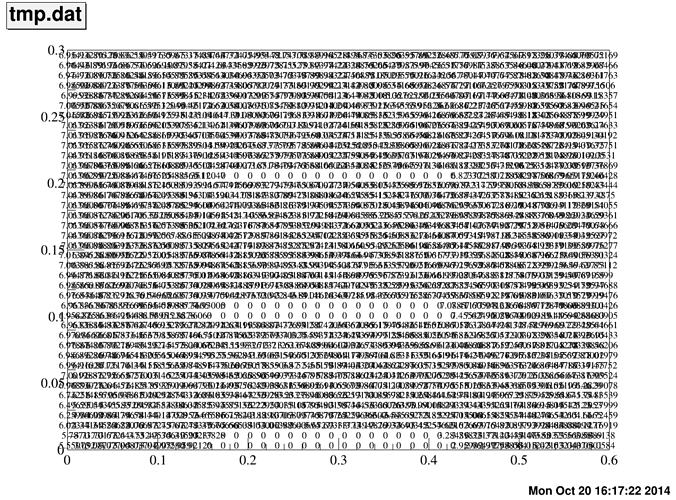 no it does not solve the problem (now I have white space like you do but there must be something there > 0 !)

I guess “TEXT” also do some interpolation (that fails here ?).

I look at the TGraph2D documentation and did not found a way to obtained the values (like a GetPoint() method).

Yes. This is exactly why I started looking at this problem.

Note that I tried to read the Graph values (to test if the problem come from the display or the data “storage” in TGraph2D) but the Print() method as implemented in TGraph (1D) is not present in TGraph2D. And no GetPoint() method as well.

Do you have a way to read fX,fY,fZ directly ?

using SavePrimitive() I could inspect the data save in the TGraph2D.
They look ok (i.e. more than 500 pts w/ no unexpected zeros)

Conclusion : this is indeed a problem of display.

I just played a it with you data set. 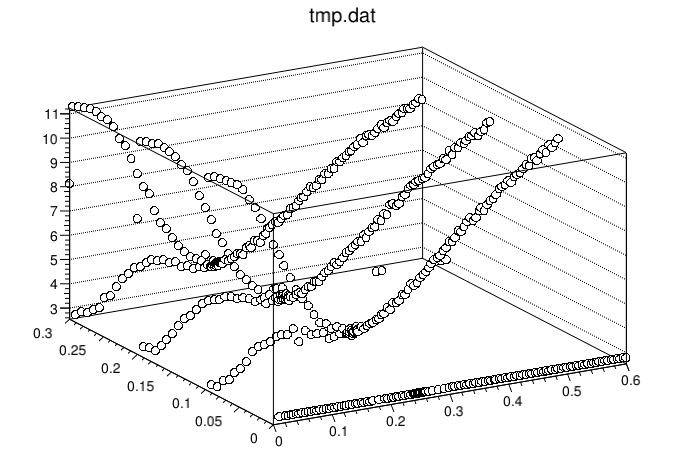 You will not see the bug with the original “tmp.dat” file.
Try what I wrote in my previous post here.

Looking at the TGraph2DPAinter code I see that some points exactly on the limits might be excluded because of these tests:

Commenting them cure the problem but that’s not a solution because points really outside should be excluded (in case of option SAME).

I think the following small data set is enough to show the problem:

With the little data set posted in my previous post I recommend the following macro.

I think the same recipe can be done on the original data set.

Your “small data set” shows one problem only -> some points are not drawn in the canvas.
With my data set you should also see another bug -> an additional artificial circle in the middle of the canvas (a “false” additional data point).

@Wile: in the following example tmp2.dat is your modified data set. 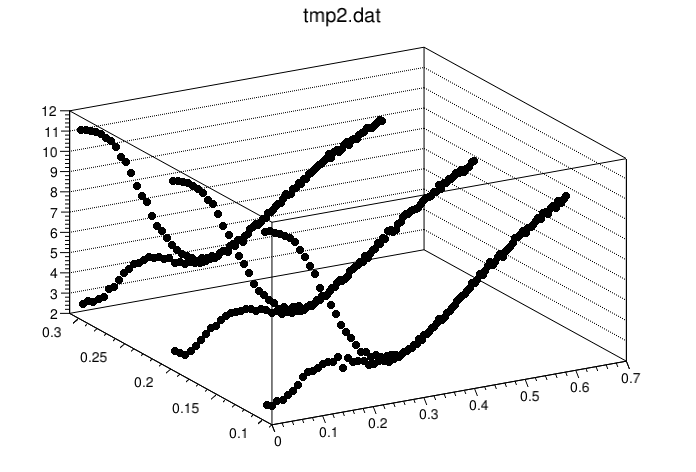 Sorry, I forgot to say that, in order to see this “artificial circle” bug, you must not “SetLimits” (but you can “SetMinimum” and “SetMaximum”).

Fixed. Thanks for reporting.