I’m using root 5.22/00a on Ubuntu, built with qt-layer on.
I’m getting a problem with the greek fonts and special characters, after the installation of texlive-latex-base debian package. In particular these characters disappeared, for example a TGraphPolar doesn’t show the pi symbol or the degree symbol, now if I uninstall this deb package everything returns to the normal.

So Is there a way to fix it? or to remove the LMMathSymbols10?
Thank you very much for any kind of help.
Cheers,

Interesting. Thank you very much for your message. That was the purpose of the “Symbol font family found” printout. It is to spot the situation you reported. I’ll try to fix it today.
Meantime, I would like to call your attention that with Qt-layer “on”, you can use QtMmlWidget too. It is included into QtRoot CVS qtsoftware.com/products/appd … mmlwidget/ directly also 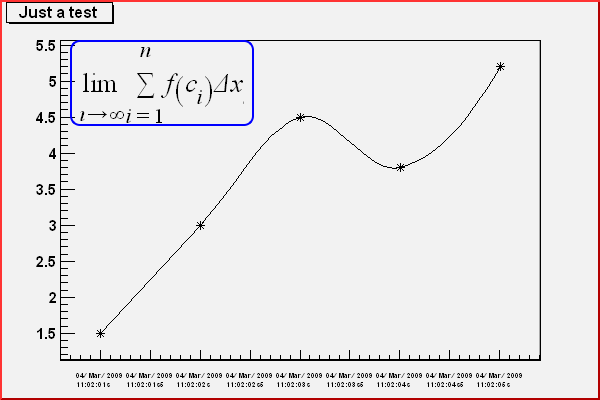 Right now you can invoke the static methodTQtPadFont::SetSymbolFontFamily("Standard Symbols L")explicitly. This workaround should fix your issue.

I have made corrections. You can download it from BNL and install against your existent version of ROOT root.bnl.gov/QtRoot/How2Install4 … Complement
I would appreciate if you could test in and let me know whether it solves your problem. If it works, I will prepare the patch and mail it to CERN.

Thank you another time,
Cheers

Thank you,
I did want to see the list of the different SYMBOL fonts you sent.
It seems to me there is no common standard defining what “symbol font family” (used by ROOT to render the LaTex objects) may or may not contain.
I will prepare and propagate the corrections to CERN SVN shortly.

Do you want something more?

) Thank you. What you had sent was enough. I do appreciate your patient assistance.