Until here everything works fine and ROOT works without problems.

Here it’s where the problems appears. The User guide and the QuickStart say that lib/libTMVA.1.so should be created however instead I get an error I can understand and that I haven’t seen in the Forums.

Here the screenshot of the error: 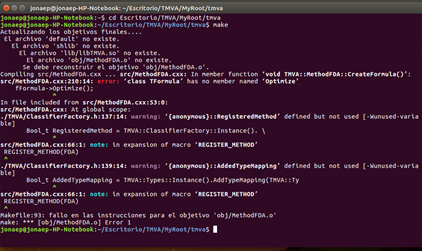 Obviously I can’t follow with the next steps that would be:

Could you please help to get this done? I would like to start using the use-cases as soon as possible.

TMVA is part of ROOT since a long while.
I propose you checkout ROOT as you did and:

TMVA is built by default.

Thanks a lot for the answer.

Could you please tell me the steps I should follow to use the macro of TMVA (par example TMVAClassification.C) because I can install Root without a problem but I can’t run the TMVA macros.

I went to the folder tutorial where It’s the file (“TMVAClassification.C”) and what I get is: 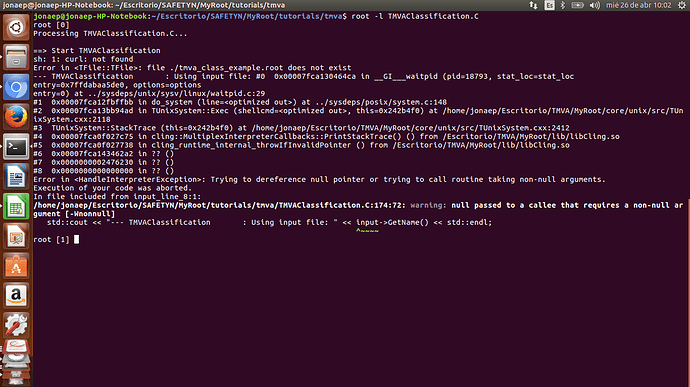 So If you can give a hint, I’d very grateful.

Hi,
the error message is telling you that you don’t have curl.
Please install it with “apt-get install curl”

Many thanks for answer so fast.

glad you solved this!

Dear Experts,
I followed the same procedure. But I am getting the attached error every time I try to install it.
Could you please suggest me one solution for it.

Hi, we’re glad to help. However, in general it is better to start a new thread rather than reviving old ones.

Ensure that you are building the latest version of root, TMVA is included in the distribution and does not need to be downloaded separately. (I mention this since the presence of the TMVA/macros folder in your screenshot, it is not used in newer versions).

If this does not solve your issue, please open a new thread and provide more details on what you are doing and your environment (version of root, commads you execute, etc.).