Maybe this issue is adressed somewhere else, but I didn’t find it anywhere. If this was already discussed, could you please direct me to the information I need?

My computer runs on OSX 10.8.5. The last Root release that I found that is compatible with this version of OSX is Release 5.34/05.
I have downloaded the source distribution of that release, but I am running into problems while trying to install Root. If I understand correctly, I am supposed to build Root following these instructions:
https://root.cern.ch/building-root
However, when trying to implement step 4, my Terminal tells me that the cmake command is unknown. Is there another way to do it?
I do have Xcode on my computer, if this has anything to do with it.

You need probably to install CMake. Just follow the instructions in cmake.org/

…and you should really upgrade your Mac

Thank you, I installed CMake. My terminal still tells me -bash: cmake: command not found but I was able to open CMake as an application, select the build and source folders and build root (some elements are not ticked however – see image, I don’t know if this is normal). 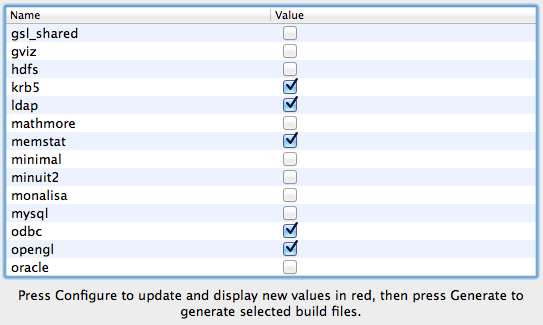 I don’t know how to implement step 5 of https://root.cern.ch/building-root, and when I try to start Root (step 7), it tells me -bash: root: command not found.

I have consulted an acquaintance of mine who was able to help me install Root using a binary file instead. Everything now works.
Thank you for your help!