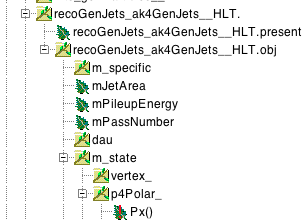 How can I access the variable “Px()” and perform plots on it?

as far as I remember, for CMS datasets, it was enough to click on the right leaf.
Did you set up the appropriate CMSSW release before opening the file (i.e. were all data model libraries found?)?
In any case, I think going for FWLite will be better for something more complex than a single quick plot.

PS
This is more of a CMS answer than a ROOT one, but I just happened to know the answer