when executing the following code in Jupyter, an exception is silently caught by the ROOT kernel and the code ends with a segmentation fault. When running the same code from the ROOT application, the message of the caught exception is displayed, as you can see in the transcript of the code execution below.

Without the exception message it’s difficult to identify the problem is less trivial similar cases, where the user made a typo in the column name.

I’ve attached the screenshot of the code execution in Jupyter, 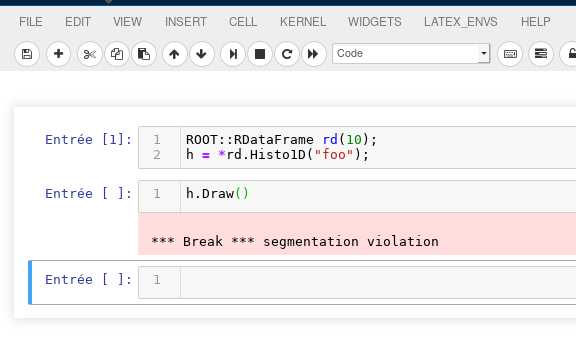 Is there an option to enable the display of the exception error or to disable the catching ?

Let me know if I should open a JIRA bug report: I see two problems: the message that is not displayed and the undefined state of the variable h, that leads to a segmentation violation later in the code.

I’ve tested the code snippet with ROOT built on Debian from the git tag v6-19-02 for both root application and Jupyter and also for Jupyter with the ROOT release currently used by SWAN (6.18/00). I will test it with 6.20.00 as soon I have installed it.

Yes, this is a problem of the Jupyter kernel for ROOT C++. It looks like the Python side of the kernel fails to capture the error from the C++ side (there is an I/O handler for this). Please feel free to open a ticket.

Regarding the RDataFrame part, there should be an error saying that foo is not a column of your dataset. I understand this is not the case? Then I would open another ticket for this one too.

Hi,
note that RDataFrame does throw an exception:

This seems to be an issue in the ROOT interpreter where a shared_ptr temporary causes a segfault:

@Axel, what do you make of this?

Indeed the error message is displayed when running from the ROOT application, it's only on Jupyter that it is not. Nevertheless, in both case we have a segmentation fault in the next statement.

Yes, my guess would be that due to the crash the exception is not propagated correctly.