I use TMVA 3.9.2 within ROOT v5.20.00. I have signal and background event samples with Monte-Calro generator weights: +/-1. When I try to use these weights, it seems they are applied only to the Training sample but not to the Test one. Please, find the corresponding TMVA plots in the attachment. One plot shows the result when the MC weights are not applied and another one shows it when they are applied.
Is it possible to apply the MC weights to the test sample and how this can be done?

Thanks much in advance. 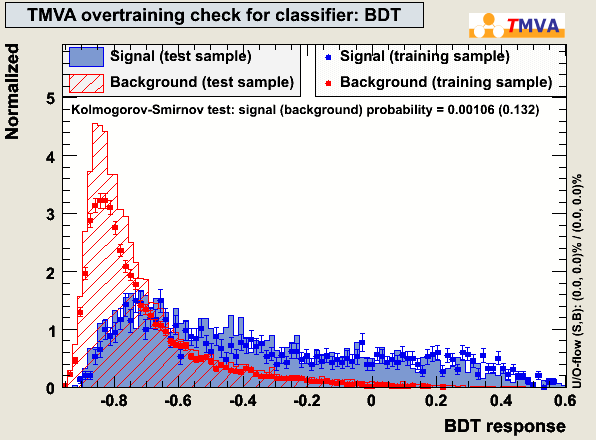 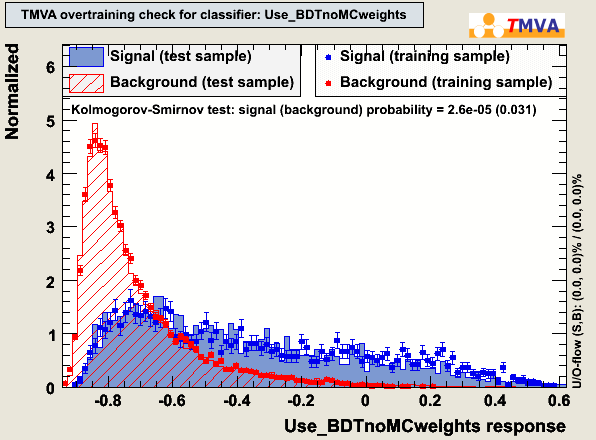 I don’t think the problem is a non-application of the weights, but rather a normalisation mismatch in the plot. Indeed, in the macro “test/mvas.C” (I assume you use the TMVA version in the ROOT release? If you use the sourceforge version it would be “macros/mvas.C”) which does the plot you will find in line 110 the command:

which applies to the test histograms. When overlaying the corresponding training histograms the normalisation is not applied, which is a mistake. We will fix that, but until this is in the release I suggest you insert the following command:

In line 183 of the “mvas.C” macro. This should fix your problem.

Thanks for reporting this!