Thanks for the announce. Sadly, I didn’t manage to build ROOT v6.20/02 and /04 without PythonLibs. ROOT v6.20/00 is however successfully built by

As far as I understand, PythonLibs are not required yet by ROOT, correct?

Tried (both with -D python=OFF appended and without), with exactly the same result.

I have also tried to use ccmake (ncurses UI to cmake) instead of plain cmake. The first screenshot is what I got after running

(checked it out to v6-20-00). Then I removed everything, checked out ROOT repo to the latest v6-20-04, and repeated what I’ve just typed above. The second screenshot is what I got after that. So it seems to be something wrong with the latest version – I just don’t have any options to switch them ON or OFF.

UPD also attached two CMakeCache’s, the results after running “cmake ~/src/root” for each ROOT version. Sizes are 44K vs 14K: 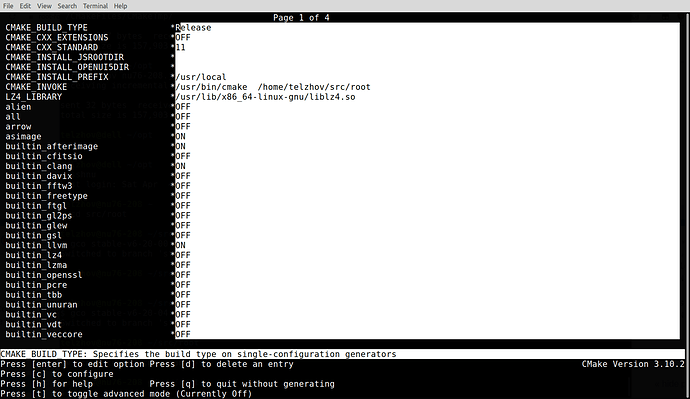 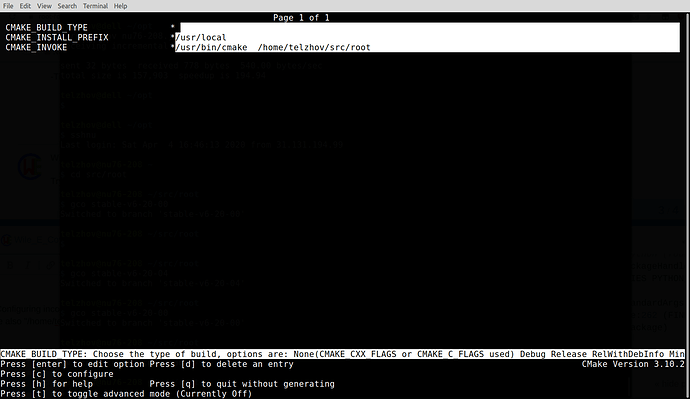 Here I have install this new release on my Ubuntu machine. And I’m doing work with this new release. Thanks for your support and update to me. Here, I have attach some images about the root and pyroot.

I believe that it builds if you have PythonLibs installed. But I don’t need pyroot, and that’s okay for v6-20-00 – it builds successfully without PythonLibs. ROOT v6-20-02/04 seems to require PythonLibs to be installed, and I’m not sure that this is correct.

Thanks for your report, @telzhov . I have moved this into a dedicated topic.

@etejedor could you see whether you can reproduce this?

Here first you have to install the Build Prerequisites for the different platform here is also the python-dev from this link:

I don’t have to install python-devel – it’s listed under ‘Most common optional packages’ section. This is the problem: the python-devel package should not be required by ROOT.

And I agree it’s a problem

and I’m hoping for @etejedor to take look tomorrow!

@telzhov Thank you for the report and feedback! We realized that requirement of python-dev was not mentioned in release notes. There is opened PR https://github.com/root-project/root/pull/5303 fixing this issue.

I forgot to mention that we will update https://root.cern.ch/build-prerequisites as well

It’s good to update the prerequisites for the root built.

@oshadura, thank you for reply.

pyroot gained new features, great for it. But I don’t need pyroot at all, so why do I have to install python development libs for 6-20-02 onwards?

UPD Finally I decided to check whether ROOT really needs libpython-dev to build, so I performed the following steps:

Hence, ROOT doesn’t need python-dev really (otherwise it’d just fail to build), and it seems to be a bug in CMake configuration which claiming it needs python-dev to work properly.

@telzhov we adopted a procedure of discovery of Python components for ROOT. Master (fix is merged) and 6.20.00 patches got fixed to be able to be build ROOT without python-devel (without PyROOT enabled): https://github.com/root-project/root/pull/5322

Thanks a lot for feedback!