This is an answer to a mail posted by Akira in roottalk:

Is there any example of human body modeling like tutorials/lego.C ? I would like to put a person in my detector geometry as a scale reference for a presentation. It is hard to build a person from scratch.
[/quote]

Well, we don’t have an example… Since many nice geometry examples came from users I thought it would be nice to promote their contributions better: The nicest human body geometry example posted to this thread (macro + picture) will go into /geom tutorials (well, in absence of a better prize

First candidate already posted to roottalk: Christian (well, not the most common user profile I would say

[quote]
Attached is a script that draws a 3D man using TMarker3DBox objects.
The man is 180cm tall (a “standard” man - at least in Northern
Europe

, and faces in the direction the positive z-axis (and obvious
extension would be to make this a parameter). It’s really simple.
I’ve also attached a picture of the ALICE ITS, FMD, T0, V0, beam-pipe,
and absorber nose with a man in it, so that you can get a fell for how
it looks. The image is not that high in resolution to save band-width.

Of course everybody is encouraged!
Please post your man here until 12 November. A poll will be opened after.
Thanks a lot to all contributors !

The attached is my version.

However, I have a question for you (and Andrei) - can you put in volumes and nodes after you’ve closed the geometry?

Andrei, what to you mean?

well, not the most common user profile I would say

Anyways, I played around with my script a little, to see if I could turn the humanoid (I guess that’s the term

) around the Y axis (usually the upward direction). Turns out, that you cannot do this with TMarker3DBox

, so I had to make a small derived class that does allow rotations around Y.

However, since the class derives from compiled code, it means that the attached script must be compiled - a major deficit in my mind

. Perhaps we could allow TMarker3DBox to be rotated around the Y axis? Perhaps there’s some other way to do it?

I’ve also attached a small sample where the humanoid is turned 45 degrees. The script has the function TestMan that will make that image. 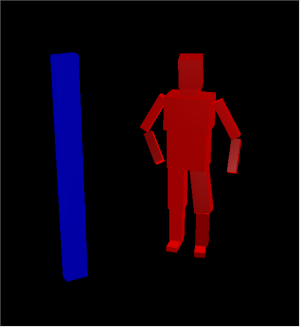 However, I have a question for you (and Andrei) - can you put in volumes and nodes after you’ve closed the geometry?

Yes, I can. And you can try. But I do not know the point of your question.

For Christian, what I meant was that you are not quite the root beginner user that starts playing with examples (it was not a bad remark

Well adding nodes to a closed geometry probably will not kill it for visualization purposes (it was forbidden some time ago) but I really don’t advice it. I would be probably a minimal amount of work to make this possible after the recent restructuring, but not yet there…

Well nice going guys… If anybody else wants to try making little fellows, there are some nice examples (even if more complicated) like: /tutorials/geom/tank.C , station1.C, station2.C and so on…