Hello Everyone,
I am very new to ROOT and am trying to plot a 2D scatter plot of some simulated data from GEANT4. This data comes in the form of a TTree (called ‘Scintillator’) that lives in a directory (‘ntuple’). In this data, I am trying to plot ‘NumGammaProduced’ vs. ‘Edep’.

I can get the plot working using the TTree::Draw function but, whenever I try to show the stats of the plot, I only see 0s. I am very new to this software so please excuse any beginner mistakes. Attached is the macro that I am currently using in case it helps - it should be relatively simple.

The plot of my output is attached, showing the null stats.

Any help would be greatly appreciated!

You can create, fill, and draw a 2-d histogram (TH2F). You will see its 40x40 grid of bins, drawn with the default “scatter plot” option.

You can create, fill, and draw an unbinned 2-d scatter-plot (TGraph). You will see all individual TTree’s data points.

Hello,
Thank you very much for that help - it has allowed me to produce my desired plots

One note, while I would love to default to the first recommendation that you provided (since it is simpler), it appears to cause the plotting itself to fail. To demonstrate this, look at the following correct plot of the distribution using your second recommended method: 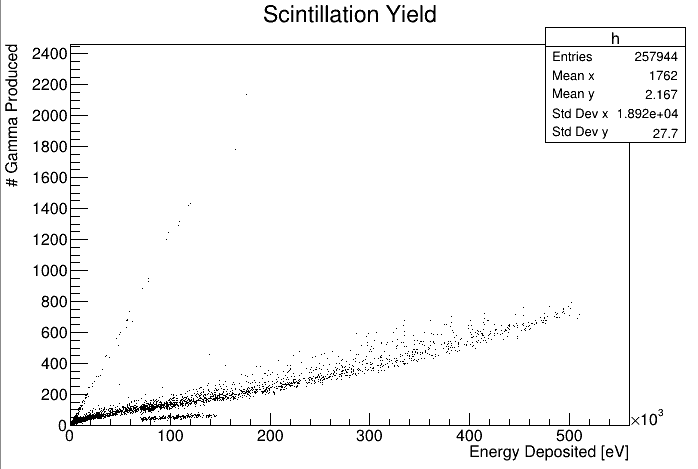 image698×469 6.65 KB
Comparing that to the plot from the first method (shown below), some issue becomes apparent 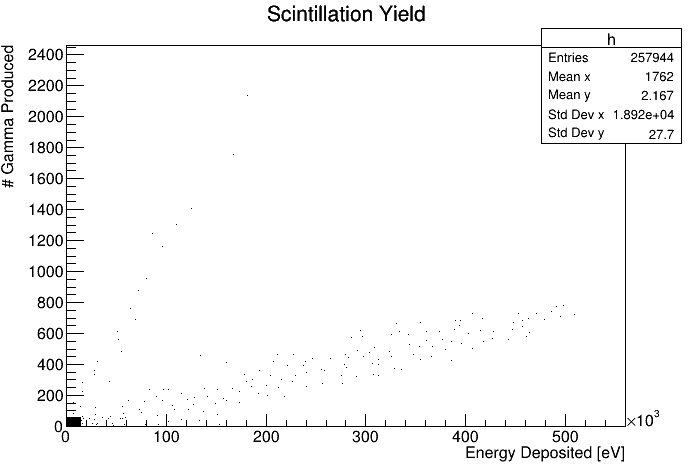 image694×468 6.63 KB
While the statistics are identical in both methods, the plot from the first-suggested method appears to have noise roughly uniformly distributed between energy deposits of 0<=E<=14000 eV and # Gamma Produced between 0<=n<=60: 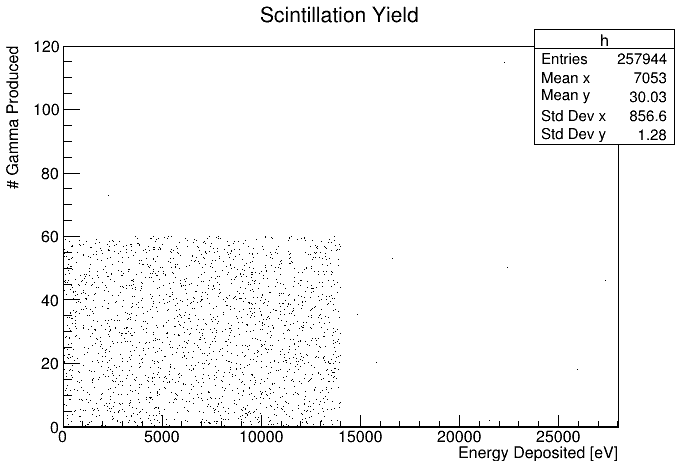 I copied the code directly from the above post so I do not imagine this is due to an error on my part, but I am very new to this software so it very well could be. I can recreate this behavior in your second-suggested method (the ‘good’ method; plot shown at very top) by commenting out the line “((TArrayF*)h)->Reset();”, so I assume this issue is somehow due to improper ‘resetting’ of the histogram bins.

Focusing on the second method as that appears to work properly for me, it appears that the issue was that my histograms were somehow never filled - is that correct? In my minimal example of this second method (pasted below)

it appears that the essence of the modification is in calling the Draw function twice - is that correct? I would imagine that simply calling the following code would suffice, but clearly even after calling GetPrimitive, the TH2F that h points to stays empty.

Any further explanation/discussion on this code (or just pointers on places to look, such as in your previous two linked threads) would be greatly appreciated.

Thank you, again, very much for all of the help!

Perfect - that resource clears up my conceptual lack of understanding!

There still seems to be the issue of the two methods resulting in different outputs (but identical statistics), as demonstrated in my previous post. In brief, the first-suggested method seems to be broken in that it shows incorrect data near the origin while the second-suggested method does not have this issue. Do you/anyone else have insight on this?