I use ROOT 5.16 to analyze medical images. Usually I work with 8bit gray scale pictures using the TASImage package which works fine. Now I want to use a 16bit image format (tif). Is TASImage able to deal with 16bit tif format?
For my 8bit pictures I usually use the following code to access the individual pixel values:

Is there any similar method foreseen to access 16bit image pixel values?

I use ROOT 5.16 to analyze medical images. Usually I work with 8bit gray scale pictures using the TASImage package which works fine. Now I want to use a 16bit image format (tif). Is TASImage able to deal with 16bit tif format?
For my 8bit pictures I usually use the following code to access the individual pixel values:

Is there any similar method foreseen to access 16bit image pixel values?[/quote]

do you mean 16 bit gray image?

Yes, I mean 16 bit gray images. I have add one as attachment for you.

strange, I can’t get attached image.

Luke, you can use “vector images”.
Vector image is an image which colors are defined by doubles (in the range from 0 to 1)
with correspondent color palette.
For gray images, it’s “natural” to measure a color in luminosity units
(luminosity specifies a shade of gray).
Luminosity can be calculated as

Using this formula and iterating through all RGB colors in an image you can convert
RGB values to doubles and create correspondent color palette.

[quote=“Luke”]Yes, I mean 16 bit gray images. I have add one as attachment for you.[/quote]I do not see your file.
However, I would like to call your attention that with a small effort one can complement the ROOT classes with Qt classes:

It sounds, QImage class has no constrain you have been speaking about.
To confirm that, I need your file. In return, I can provide a small ROOT macro that demonstrates the outcome.

Please find the screen shot made with the ROOT macro and the file you had uploaded[code]void gray_image()
{
// Display image in a new canvas and pad.

if (!img) {
printf(“Could not create an image… exit\n”);
return;
}
img->Draw(“xxx”);
}[/code]This macro does require the ROOT TImage Qt-based plug-in compiled against of Qt 4.x ( trolltech.com/customers/coolapps )
This is to demonstrate the file format in question can be treated properly by Qt 4.x ( I did find Qt 3.x can not read it). The ROOT plugin in question is a part of Qt- Extension available from root.cern.ch/root/doc/RootDoc.html “26 ROOT/Qt Integration
Interfaces” This way your application are becoming Qt-addicted

though. Anyway, by some reason, you do not use the generic base class, namely TImage. You use the class concrete libAfter-based implementation. Why ? If you used the TImage then you may have switched between the different implementation ( afterImage / Qt) by providing the different TImage plug-ins via ROOT resource file “.rootrc”. You may not have required to change your code and re-compile it. 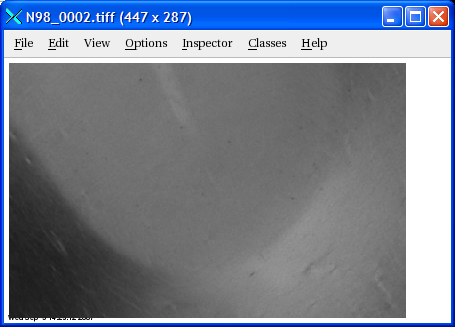 Is there any similar method foreseen to access 16bit image pixel values?[/quote]
Hello Luke, May I ask you a question to make sure I do understand your needs? The Argb array provides 8 bits precision for the gray images. Speaking about “similar” method, did you mean you agree to lose the precision your 16bit gray file contains or you meant you need a method to access the flat array of 16bits gray pixels. I.e. you want the array of “unsigned short”'s.
The short stand-alone Qt-4.x based code:

To work with 16-bit grayscale format I suggest to use a vector image.
Luke, as far as I understood you have a camera which output is
2D array of 16-bit values (?).
You need to create an array of doubles (from camera output)
in the range [0, 1] and TImagePalette
root.cern.ch/root/html/TImagePalette.html
which makes correspondence between double values and colors.

Could you send me a file with camera output data (as text file)?
I’d like to prepare an example how to do it.

this thread is a bit old, but I couldn’t find the example. Have you made it?
If you need an 16 bit gray scale TIFF I can provide one for you, just let me know.

Hi Valeri,
thank you for the reply:

However I don’t feel comfortable with Qt. Is there any way to process 16 bit tiff images in ROOT without involving Qt?
The last post from Valeriy Onuchin sounded like there is

Hi,
if you are working under win you can use native "The Windows Imaging Component"
microsoft.com/downloads/en/d … laylang=en
to work with 16 bit tiffs

thank you for the reply!
I use ubuntu 10.10.
I tried libtiff as suggested but it shows some bizarre error:

Error: Function TIFFOpen(“foo.tif”, “w”) is not defined in current scope

although both the arguments should be:

[quote] TIFF* TIFFOpen(const char *filename, const char *mode) [/quote] (extract from the man page)
any comment or should I look for a libtiff forum?

is quite trivial. This means, you did not include header, or this header does not declare TIFFOpen (new/older version?)

I wish it would be so trivial, however the header (tiffio.h) is included (but of course

Did you do this from CINT? If the answer is ‘yes’, then you should create and load the Root/Cint dictionary first

I was talking about compiled program, not the macro executed by CINT.
Try to compile your macro .L macro_name.C++ and this will work.